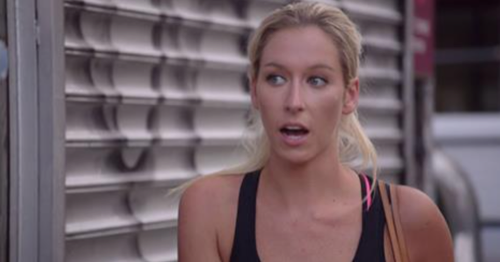 Tonight on VH1 their docu-soap series Mob Wives continues with an all new Wednesday February 24, season 6 episode 8 called “Cuts Both Ways,” and we have your weekly recap below. On tonight’s episode a reality series about allegedly “connected” women and their lives when their men go to prison.

On the last episode, Ang received news that exposed the cracks in her marriage; Brittany’s issues with Renee and Carla created a stronger alliance with Drita; a rumor reopened the feud between Drita and Karen. Did you watch the last episode? If you missed it, we have a full and detailed recap right here for you.

On tonight’s episode as per the VH1 synopsis, “the war between Karen and Drita worsens when Brittany relays a rumor; the women try to cheer up Ang before a surgery; Renee takes up a new hobby.”

Tonight’s episode is going to be another drama packed one, which you won’t want to miss. So be sure to tune in for our live coverage of VH1′s Mob Wives season 6 episode 8 at 10PM EST! While you wait for our recap, hit the comments and let us know how excited you are about the new episode of Mob Wives tonight. Down below sound off and tell us what you think of Mob Wives season 6 so far!

On this weeks episode of Mob Wives Drita finishes the first draft of her book and prepares to send it off to the publisher. She is still upset about the rumors that Karen has been spreading, but decides to put it aside. When Drita finishes printing out the book she shows it to her daughter and tells her that it will be a thick book. The little girl asks if “I have to read it all.” Drita laughs and tells her No.

Renee is upset when her son gets his license suspended after getting another ticket. AJ tells her that she “needs to loosen up and go for a drive.” Renee tells him that she needs him to stop getting speeding tickets. Renee also says that she is “tired of the mess that her son leaves around the house.”

Brittany meets up with Karen to talk to her about the incidents between the two of them and the other women. Brittany tells Karen that Drita is going around telling everyone that “Karen is going around talking about the men and that Karen is obsessed with her husband Lee.” This makes Karen angry. She tells Brittany that Marissa was the one who brought up the men. She also goes on to tell her that she is not obsessed with Lee.

She also tells Brittany that twenty years ago when she and Lee were living together they went to visit her father, who was in jail and he told Lee that he had to step up and show him what kind of man he was going to be for his daughter. Karen tells Brittany that” when Lee heard this he ran away.” Karen then tells Brittany to let Drita know that “she has a man who is twice the man that Lee could ever hope to be.” Brittany says “I knew that Karen and Drita had a long history, but I had no idea it was this deep.”

Neal returns to the house the day after his huge blowout with Ang. She asks him what he is doing there. Neal tells her he has come to make up, but Ang isn’t hearing it. Neal apologizes for missing the Drs. appointment where she found out about the lung cancer, but he also tells her that he wants to be there for her when she goes to have surgery.

Karen, Carla, Renee and Marissa meet up to play Bocci ball. Karen tells the girls about her conversation with Brittany. Marissa tells Karen that she never brought up her name to Drita. Renee tells Karen that “Brittany is an instigator and a third party who needs to stay in her lane.” Renee also tells Karen to keep Brittany away from her. Karen gets angry and calls Drita out about getting a whole neighborhood in trouble because of her big mouth.

Ang and Neal head off to meet the lung surgeon to set up an appointment. Ang is not happy to hear that they are going to remove part of her lung and that if her Lymph nodes are involved she may have to have surgery. She is scared that she is going to die.

Renee heads off to dance lessons as a hobby to help her not focus on AJ so much. The dance instructor tries to get Renee to relax and tells her to “trust him.” Renee says that “she doesn’t trust anyone easily.” She ends up really enjoying the lesson and decides to stick with them.

Ang and Carla go out to redecorate Carla’s cottage. Ang tells Carla about the surgery on her lungs. She doesn’t want to focus on that so she asks Carla what is going on with the girls. Carla tells her about the incident between Karen and Drita. Carla feels that Brittany is disloyal for passing messages back and forth. She also thinks that both Marissa and Brittany need to get out of the middle of the mess between Karen and Drita. Ang agrees and says that “Karen and Drita need to sit down and squash this.

Karen says that “the mess with Drita is distracting her from her daughter Karina so I am going to get back to he happy place.” She sits Karina down to show her pictures of her father and tell her stories about him. She tells Karina that “art kept her father sane while he was in solitary confinement in prison.” Karina says that they should call him the “Picasso.”

Ang meets with Drita and tells her that Brittany met with Karen and told her everything that Drita said. Drita says that “she doesn’t care “ Ang then tells her that Carla was also saying things and Drita goes off. She says that Carla is like her lipstick, she can’t tell anyone anything.” She then goes off and says “All those other girls fear me. I have been too nice for too long and all of the buildup is going to explode.” Ang is worried that this situation is going to boil over into something dangerous.

Karen decides to plan an art experience to help get Ang’s mind off her upcoming surgery. The teacher tells them that they are going to be painting a nude model. The ladies laugh and joke as Ang gets to pull the towel off of the model. The teacher asks “what they are drawing?” Ang shouts out “Kurt!” The girls have a great time laughing and joking. Renee says that “It’s great to see Angela having a great time.” She also says that “with all of the petty drama that is going on with the ladies Ang’s issues really put things in perspective.”

On the morning of her surgery Ang’s mind is whirling. She worries that she will never see her children or grandchildren again. She says “I am the glue that holds my family together and without me they would fall apart.” Ang says that “Even though she has done a lot in her life she still needs to be around to see her grandkids grow up.” Neal tells her that she will be fine and that he will be with her the whole time.