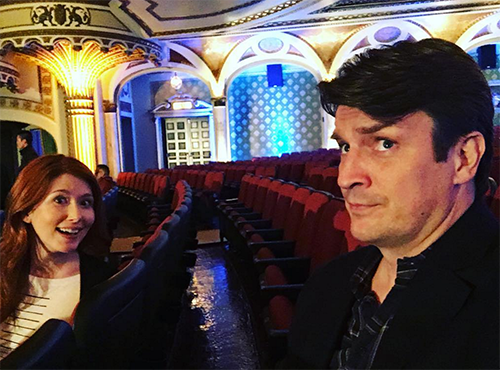 Castle fans are still reeling from news that ABC cancelled the popular primetime drama after 8 long seasons. But, one person who doesn’t seem too upset about the cancellation is the Richard Castle portrayer himself, Nathan Fillion. In all honesty, Nathan Fillion almost seemed happy to be moving on from Castle. After ABC announced that Castle had been cancelled, the cast and crew took to social media to say goodbye to fans and thank them for their support over the years – but Nathan Fillion’s bizarre statements are raising a few eyebrows.

After news broke that ABC had decided to drop Castle altogether, Fillion took to Twitter on Friday, May 13 and tweeted, “All things must end. It has been an honor working with the men and women of Castle. I am truly amazed at what we’ve done. Thank you all.” Short and sweet, right? Well, it’s his second tweet that has left a few fans perplexed.

FIllion then added, “Dear Every Director, It appears I have an opening in my schedule. Dear Fans, In whatever project I do next, loudly notice how unlike Castle and fresh and versatile I am. Thanks.”

The “opening in my schedule” is a bit sarcastic – but hey the man has gotta eat, who can fault him for looking for a new job? The “fresh and versatile” part is what some Castle fans are taking offense to. Is Nathan Fillion implying that he thought the show was growing a bit stale and he was happy that it was finally cancelled?

Perhaps Nathan Fillion should have taken a page out of Stana Katic’s playbook. The actress posted this sweet note on social media to her followers, “Dear Castle fans, cast and crew: Your devotion to our show has carried us for these unforgettable eight seasons. I’m lucky to have met and worked with and for the lot of you. I will always be grateful. Big hug, Stana.”

What do you think Castle fans? Was Nathan Fillion dissing Castle and his co-stars? Or was that just a poorly worded tweet that was supposed to be funny? Are you upset about the cancellation? Let us know what you think in the comments below!