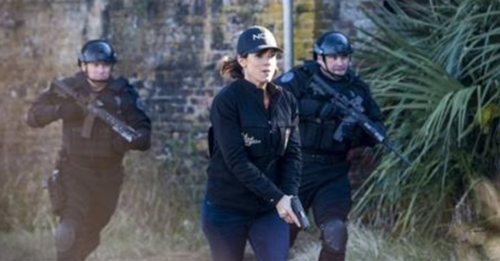 Tonight on CBS NCIS: New Orleans returns with an all new Tuesday April 19, season 2 episode 21 called, “Collateral Damage,” and we have your weekly recap below. On tonight’s episode, the team is asked to breach standard protocol for an investigation.

On the last episode the NCIS team investigated the murder of a Navy Lieutenant during a French Quarter second line funeral procession, a New Orleans tradition that celebrated the recently deceased with a musical street parade. Did you watch the last episode? If you missed it, we have a full and detailed recap right here for you.

On tonight’s episode as per the CBS synopsis, “the team is asked to breach standard protocol for an investigation after a Navy lieutenant is murdered during a covert visit to a general’s hotel room.”

Tonight’s episode looks like it is going to be great and you won’t want to miss it, so be sure to tune in for our live coverage of CBS’s NCIS: New Orleans at 9:00 PM EST! While you wait for our recap hit the comments and let us know how excited you are about the season 2 episode 21.

Tonight’s episode begins now – Refresh Page often to get the most current recaps!

n old friend had asked NCIS Special Agent Dwayne Pride for a favor on tonight’s all new episode of “NCIS: New Orleans”. Apparently a naval officer had died in a hotel room and this supposedly good friend wanted the death to be under the radar though as it turns out there were a few this friend couldn’t hide. Lieutenant Rebecca Peterson had met with General Matthews and the two had had a glass of wine. And that wine had been poisoned, at least that’s what everyone had initially thought

Rebecca had reportedly had a rough day on the day she died. So Rebecca had accepted a glass of wine from the General and she hadn’t sipped it, she had instead guzzled it down as if it had been water. But many thought it had been the wine that had been poisoned and so naturally the General’s people had been concerned about him seeing as he had unfortunately had a sip of his own before Rebecca began coughing up blood. And then died right in front of him.

So while the General’s right-hand man Samuel Nilson had wanted the inquiry into Rebecca’s death to be discreet, Pride had had to go against his friend and bring in his people on this one. Samuel hadn’t wanted any of Pride’s people or an actual Medical Examiner there yet he had been ultimately overruled. And so the only thing that Samuel could bury was the fact the General had to be taken to the hospital for arsenic poisoning.

However, the wine at the scene had been tested and there had been no traces of arsenic. So the team had continued looking and at the same time they had to notify Rebecca’s father. The same father that would go on to tell LaSalle that he believed his daughter had a boyfriend she didn’t want him to know about and that his daughter would take sudden trips. Like the last one to Florida.

Only LaSalle had been given specific instructions not to mention to the General to the grieving father even though both men had been roommates in college. So by time the guys went back to their office, they had a lot to say to Pride. LaSalle told him that Rebecca had a secret boyfriend and he also spoke about her mysterious trip to Florida. While Brody and Sebastian had to tell Pride that the General had been given access to a private elevator for VIPs and that the General had asked for additional key to be given to his lady friend whenever he was in town.

And, well, that lady friend was proven to be Rebecca. So the General had lied to NCIS when he said that he hadn’t seen Rebecca in years. He had, but the gist was he hadn’t wanted anyone to know that he was sleeping with one of his officers. Something which violates Uniform Code of Military Justice and would have ruined the General’s chances.

The General was up for a plum position at Homeland Security and an affair with an officer beneath him would have ruined everything. So Pride’s people believed the General was their most likely suspect. He had motive and about one-tenth, of arsenic found in Rebecca, found in his system at the hospital. However, Pride didn’t want to rush to judgment. He said the General was a war hero with three stars and that there would be repercussions of they were wrong.

So Pride decided to call the General in for questioning. Pride wanted the General to finally be honest about the nature of his relationship with Rebecca and he basically said the General’s three stars didn’t mean a thing in an NCIS’s interrogation room. And so the General agreed to be honest with him though neither Pride nor his people had expected that the General would admit to helping Rebecca out on a case.

Rebecca had been investigating corruption at the port and she believes someone was secretly stealing millions of dollars from the U.S. Government. So Rebecca had gone to the General for help on what to do as well as to get some classified files he promised her that was supposed to detail the navy’s transactions with that port. Only the guy Rebecca was looking into had figured out that Rebecca was close to finding him and decided to kill her. And so suspicion stopped being on the General and instead fell on the people Rebecca worked with.

Apparently Loretta had figured out that Rebecca had been poisoned early on in the day so they had asked the General about it and he informed NCIS that he had visited Rebecca at her office. Where he had also accepted a cup of coffee. So Sebastian did some digging around and realized that those little cups used to make the coffee had held the arsenic. It seems he had done some testing back at his lab and it had showed him how arsenic could be almost undetectable.

Though while the General merely had one cup, Rebecca probably went on to have a good three. So both Pride and his friend Samuel had raced down to the ports to speak with the Navy contractor down there when they spotted that same contractor trying to hand Brody a cup of coffee. And that’s when the men chose to act.

Pride knocked the coffee out of Brody’s hands and that led to a chase for the contractor. Who they eventually found trying to hide out amongst the incoming shipments, but their murderer refused to say how he had known Rebecca was onto him. And he later died in jail from what look like arsenic poisoning.

Only Loretta didn’t think his death was a suicide and it was strange that someone had gone to the press detailing the dead girl in the General’s hotel room.

Was there a leak or was something else going on? Either way, though, Pride now has the entire Army angry with him. And his friend Samuel’s career in the Army was suddenly over.