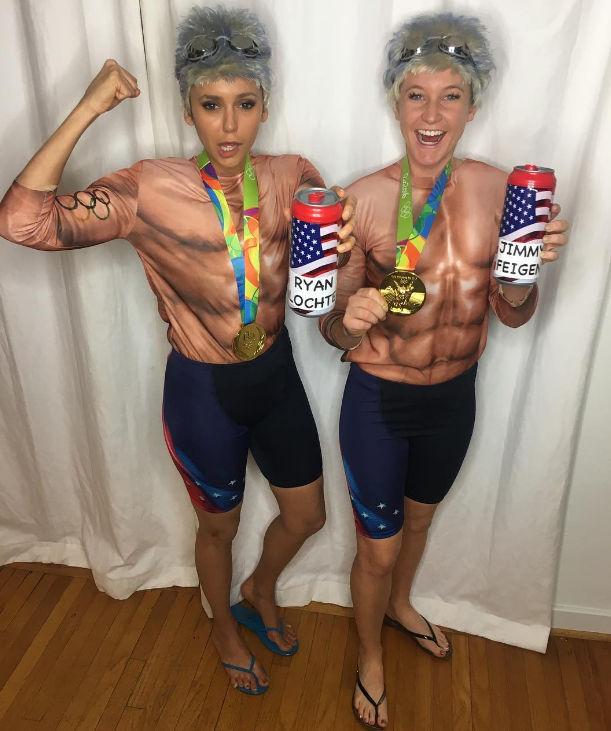 Nina Dobrev was poking fun at disgraced Olympic swimmer Ryan Lochte by dressing up as him this Halloween. Some would say Nina Dobrev was bullying Ryan Lochte by posting insulting photos online on her instagram account. The former ‘The Vampire Diaries’ star dressed up as Lochte at Matthew Morrison’s 7th Annual Halloween and birthday party in Los Angeles this past weekend.

If that weren’t enough, Nina also had some friendly costume competition from ‘Twilight’ star Taylor Lautner, who also dressed up as the swimmer and ‘Dancing With The Stars’ contestant at the same party, too. The 27-year-old actress shared a photo of the two together on her Instagram account and captioned it with, “How many Lochte’s is too many Lochte’s? We’re capping it at 3. #GreatMindsThinkAlike #GoUSA @taylorlautner.”

So far Ryan himself hasn’t responded to Nina Dobrev and Taylor Lautner’s costumes, although it wouldn’t be surprised if he was unimpressed or even upset over their efforts. After he confessed to lying about being robbed at gunpoint during the 2016 Summer Olympics in Rio de Janeiro this past weekend, the athlete has been doing everything he can to make people win back the public’s trust although according to his critics, the damage has most definitely been done.

Many have not only called him a disgrace to the sport of swimming, but as an American as well.

Ryan Lochte has gone through so much embarrassment and ridicule these last few months that the last thing he wants is to see celebrities poking even more fun at him. In fact, he’s been working hard trying to reverse the public’s opinion about him and no matter how hard he tries, nothing seems to work.

And with celebrities like Nina Dobrev and Taylor Lautner dressing up as the disgraced Olympic swimmer for Halloween, it just further proves that no one is taking him seriously in the celebrity world. Ryan will always be remembered for the lies he told in Rio de Janerio, regardless of how he tries to desperately change what people think of him.

Then again, Ryan Lochte was never seriously taken even before the 2016 Summer Olympics to begin with. Sooner or later people are going to end up forgetting about him, with critics agreeing that Ryan should at least be thankful that he hasn’t found himself deep in celebrity obscurity just yet, although it’s going to happen sooner rather than later. Do you agree?

Despite Ryan’s bad behaviour it is still unfortunate to see Nina Dobrev engage in what some fans have called online bullying. Do you think Ryan Lochte’s wrongs make it okay to ridicule him in such a public manner? Does this ridicule of Ryan reflect poorly on Nina’s judgement? Come back to CDL for all the news and reports on Nina Dobrev!

Had a blast in Rio. Oh, and we also won some Gold Medals. #GoUSA🇺🇸🏊🏼🏅#RyanLochte #JimmyFeigen

👻😂 #Repost @_matthew.morrison_ with @repostapp ・・・ What’s up Ryan Lochte (@ninadobrev)? You were so in character all night!! Love it! #halloweenbash #harleyquinn #joker #ryanlochte