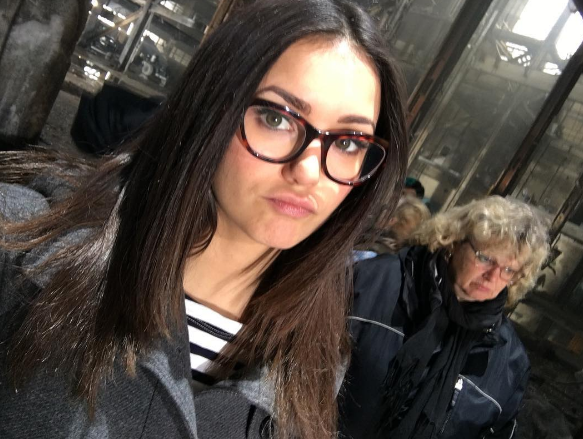 Nina Dobrev is returing to ‘The Vampire Diaries’ Season 8 according to EP Julie Plec. ‘The Vampire Diaries’ spoilers for Season 8 reveal that executive producer Julie Plec, in an exclusive interview with Entertainment Tonight, has just about guaranteed that Nina Dobrev is returning for the final season. The showrunner also hinted at a crossover for season 4 of ‘The Originals.’

What did Plec have to say when asked if Nina was going to reprise her role as Elena Gilbert for the final season of TVD? The ladies have talked and Nina has given the showrunner a really good feeling about bringing Elena back to Mystic Falls.

If Nina Dobrev doesn’t come back Julie Plec blames it on scheduling – and she’ll be completely devastated if there isn’t some sort of compromise. “I have a feeling the cards are in our favor,” the showrunner teased.

When asked about a possible crossover between ‘The Vampire Diaries’ Season 8 and ‘The Originals’ season 4, the creator and executive producer of both vampire shows hinted at a TVD spoiler for the series finale.

“I think the final episode will have some time-shifting, so I’m not worried about being inhibited from seeing ‘The Originals’ again in ‘The Vampire Diaries universe.”

Plec isn’t giving away any more TVD spoilers for season 8 or ‘The Originals’ season 4 – but the executive producer says there is a thousand percent chance fans will see a few Mystic Falls residents make the move to New Orleans for season 4 of ‘The Originals.’ But all that body-jumping, time-shifting, doppelganger magic needs to happen naturally, it cannot be forced.

‘The Vampire Diaries’ returned to the CW on Friday, October 21. Only 15 more episodes to go until we find out the fate of Damon [Ian Somerhalder], Stefan [Paul Wesley] and the rest of the vampires, werewolves, hybrids and doppelgangers in Mystic Falls. Come back to CDL for all The Vampire Diaries spoilers, news and recaps!