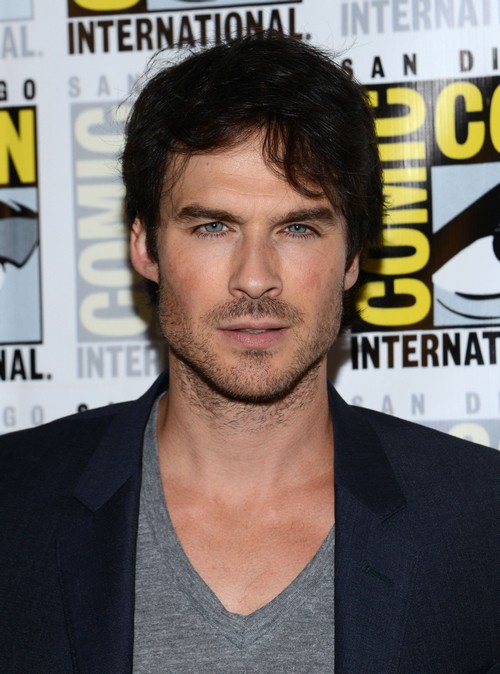 Fans of the CW series The Vampire Diaries just learned at Comic-Con 2016 that the supernatural show will air its final season this coming fall. No big surprise there. The series lost a major cast member in actress Nina Dobrev and has also enjoyed a longer TV run than most show’s in its category. But let’s face it, once Ian Somerhalder and Nikki Reed got together and Nina Dobrev quit TVD it was all over but the crying for the show.

“This is going to be the final season…it’s bittersweet and emotional and we are going to be crying about this in a few minutes. And you guys stuck with us, Vampire Diaries showrunner Julie Plec told a roomful of fans at Comic-Con.

Luckily, fan’s disappointments were dulled by the revelation of new and interesting details when it comes to the future of TVD characters Damon and Enzo (played by Ian Somerhalder and Michael Malarkey) and their journey in the upcoming eighth and final season.

During the San Diego Comic-Con 2016 panel, the supernatural series’ cast and crew shared that they plan to end the show in an epic way. With a storyline set to explore the mysterious monster within the vault that dates back to season 6. Showrunners have purposefully with held the name of this entity, its powers and its origins up until now.

The new season will focus in on the powerful effects the monster has on Ian Somerhalder’s and Michael Malarkey’s characters. As fans will recall, in the season 7 finale, Gods & Monsters, Damon and Enzo were no longer themselves after entering the vault.

Last time we saw the alter egos of Ian Somerhalder and Michael Malarkey, they had been taken over by the powerful entity, turning into crazy west coast killers who string up bodies, killing more than 60 people on a major murderous spree. The season 7 scene was an explosive and surreal moment for Damon and Enzo fans.

Season 8 will continue down that dark path with the The Vampire Diaries cast revealing that Damon and Enzo have been stripped of their self-control, alluding to some crazy and unpredictable times to come. We will also learn a lot more about the monster and the mythos behind it.

Yes, Damon and Enzo’s journey has been promised to be a fun and interesting one. While they get to keep their freedom, it was also revealed at Comic-Con 2016 that their freedom does come with some serious restrictions; the monster can make them do anything at any time and Damon and Enzo must comply like puppets.

How the rest of The Vampire Diaries characters will play into the storyline remains to be seen. Details surrounding their own journeys were not revealed. Will Elena (Nina Dobrev) make her way back somehow? That was her voice after all in the season 7 finale. Will Stefan, Caroline, Bonnie and Alaric help Damon and Enzo?

This is sure to be a major struggle for a magic-less Bonnie. Is all hell set to break loose with no way of turning back? The final season of The Vampire Diaries is set to air on the CW in October and fans are dying to see if Nina Dobrev returns.

Happy Birthday Vin :) From the first moment I met you, you have been nothing but sweet, kind, caring, wise, honest, positive and engaging. You’ve been like a brother to me, encouraging and supporting me in ways I could have never imagined, and for that I am eternally grateful. You have a heart of gold and the strength of a warrior. Your ability to touch souls and bring smiles to millions continues to inspire me. Today we all smile and celebrate you. Happy Birthday, Vin. Thanks to you I will always look for the “magic” in Every. Single. Moment. Love, Nina #HappyBirthdayVin @vindiesel