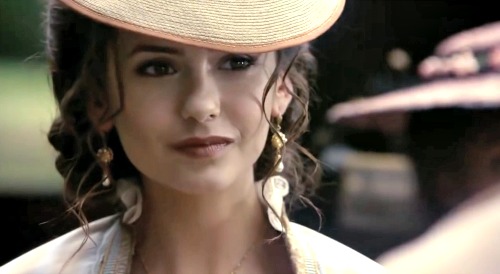 ‘The Vampire Diaries’ is wrapping up with its final season with Nina Dobrev but there’s another CW vampire series that needs rescuing. Is Julie Plec, the creator of both dramas, desperate to save ‘The Originals’ from cancellation by bring Nina Dobrev back for season 8 of TVD and then crossing Nina over to season 4 of ‘The Originals’ as Katherine Pierce?

It’s no secret that the third season of ‘The Originals’ had lower ratings than the second season. Fans were furious when Julie Plec killed off Camille [Leah Pipes] and Davina [Danielle Campbell].

‘The Originals’ is returning for a fourth season despite the dismal ratings for season 3. If Julie Plec doesn’t turn the storyline around the vampire drama won’t see a fifth season. It may not even make it through the halfway point of the fourth season. Does the show’s fate rest on Nina Dobrev’s in New Orleans as Katherine Pierce?

There has been much chatter that Nina Dobrev will return at some point to ‘The Vampire Diaries, possibly as the hinted at “meet evil herself’ promised in the season 8 Comic Con 2016 trailer. This dark and evil character reportedly isn’t Elena, but the duplicitous Katherine who has come to take down Damon [Ian Somerhalder] and Stefan [Paul Wesley] once and for all.

There is speculation that after Katherine destroys the Salvatore Brothers she’ll join forces with Marcel [Charles Michael Davis] to keep Klaus in a weakened state and attempt to find and destroy the rest of the Mikaelson family.

‘The Originals’ fans will remember that Marcel daggered Klaus during the season 3 finale, vowing to keep the hybrid in a perpetual state of agonizing limbo. Then Hayley took off with Elijah, Rebekah, Kol and Freya who had been placed in a dream-like state.

Instead of allying with Marcel it’s possible Katherine could release Klaus from the prison of his own mind and help Hayley bring the Mikaelsons’ back to New Orleans in exchange for Klaus’s promise that he will stop hunting her.

Could Nina Dobrev return for the final season of ‘The Vampire Diaries’ and then crossover to ‘The Originals’? Would a storyline involving a stronger than ever Mikaelson family in an alliance with Katherine Pierce save the vampire drama from cancellation?