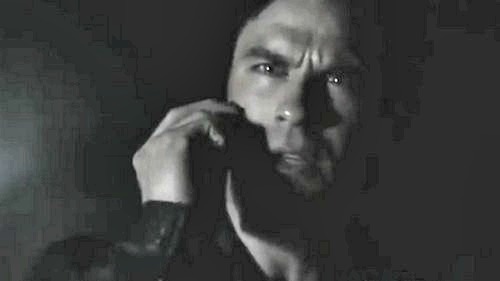 The Vampire Diaries Season 7 finale spoilers for Episode 22, “Gods & Monsters” promises to have all fans of The CW show on he edge of their seats and waiting impatiently for TVD Season 8! Time is running out to undo Bonnie Bennett (Kat Graham) as a vampire killing cursed huntress thanks to Rayna Cruz’s (Leslie-Anne Huff) last action.

Bonnie has turned the tables on Matt Donovan (Zach Roerig) and is struggling with her new violent nature.

Someone finds Matt in the SUV looking much the worse for wear, but at least Bonnie didn’t kill him. Enzo St John (Michael Malarkey) brings Bonnie back to the cabin where they fell in love to try and help her combat her urge to stake vamps.

Enzo tries to buy time for the rest of the Scooby gang to find a solution. Things start out fine with Enzo reminding her of their love but then the Season 7 Vampire Diaries finale trailer shows Enzo terrified as Bonnie comes at him with murder in her eyes.

The others need to get to the Everlasting in the Armory so they can kill it. Enzo’s theory (gleaned from torturing the shaman who transferred Rayna’s life to Bonnie) is that if the Everlasting is killed, the link will be severed between Bonnie and the spirits so she’s not a hunter anymore. Will this bring Nina Dobrev back for The Vampire Diaries Season 8 if Bonnie is killed in TVD finale?

But remember, there’s something far more wicked than Bonnie’s hunter sensibilities locked up in the Armory and it was Bonnie that locked it in there. Stefan Salvatore (Paul Wesley) has a plan to get into the Armory and kill the Everlasting and he and Damon plan to take point on this.

But how can the Salvatore brothers get in since the Armory was sealed with super-Bennett magic? Stefan needs Caroline Forbes (Candice King) and Alaric Saltzman (Matthew Davis) to agree to use their magical twins to help out.

Ric and Caroline won’t want their girls in harm’s way, but the finale trailer shows Ric and Caroline along with twins Josie and Lizzie (Lily Rose and Tierney Mumford) cracking open the doors of the Armory. Looks like a “wonder twins” power moment.

Stefan and Damon agree that what was in the vault and now on the loose in the Armory is “bad” and when they head inside, there’s gore galore. The brothers are told that they can’t fight it and can’t kill it but they have to try.

When all plans go awry and things don’t go well with Enzo babysitting Bonnie, Damon Salvatore (Ian Somerhalder) makes the ultimate sacrifice to save everyone. The trailer shows what looks like Damon heading into the vault and he hears what sounds like Elena’s voice. Will Ian Somerhalder be back for The Vampire Diaries Season 8 – will we ever see Ian and Nina Dobrev on screen together again?

There’s talk of conclusion to some romances in the season finale which means Caroline will likely decide once and for all if she’s Team Ric or Team Stefan – plus Bonnie and Enzo may be done for good. There’s also talk of a two-year time jump at the end.

Remember the leap in the closing moments of the Season 6 finale that gave us a glimpse of the ravaged Mystic Falls? Could we see a similar look at the future as Season 7 draws to a close? Plus, there’s talk a major character MIGHT die, like Ian Somerhalder,  as the action heats up. We’ll see.

Share your comments below and come back to CDL for a live recap of the “Vampire Diaries” finale – Season 7 Episode 22 “Gods & Monsters” and all you TVD news!