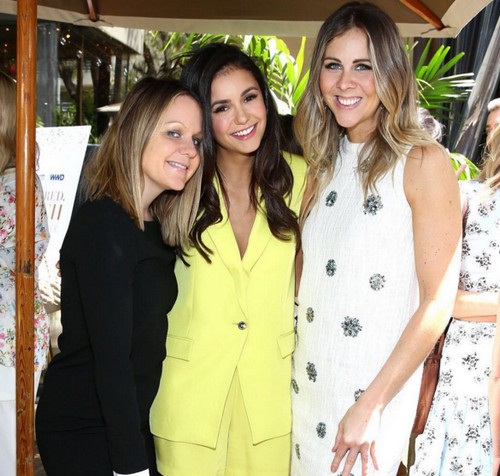 Does Ian Somerhalder think Nina Dobrev can save The Vampire Diaries from cancellation after Season 8? Someone has to save TVD because ratings are plummeting and Kat Graham has already stated if the show goes past an eighth season she’s out as Bonnie Bennett.

The actor opened his big mouth and inserted a foot at Nashville’s Walker Stalker Con last weekend. Ian said, “We have decided to do one last season to really do the story justice.” We? We who? Do TPTB know this? Has there been an official announcement?

After thinking about it for a few days Ian Somerhalder got on Twitter to clarify his position. It’s probably not the last season of TVD, however Ian believes it’s his last season as Damon Salvatore. Ian blamed his statement at Nashville Walker Stalker on “end of season foggy brain.”

Was this an attempt to get Nina Dobrev’s attention, a passive-aggressive way of begging Nina Dobrev to come back as Elena Gilbert? Fans want Nina back, and to be honest Dobrev really should consider returning. The actress’s career post-TVD hasn’t been very successful.

It certainly sounds as if the next season of The Vampire Diaries is Ian Somerhalder’s last. In his Twitter clarification the actor stated, “Hey all, so… Last weekend I talked to an audience at a Q&A about the end of #TVD and how excited I was to make what I believe – my last year – be as great as possible.”

The Vampire Diaries is really all Ian has career-wise so why would he give it up? He’s quickly approaching 40 and marginally talented at best. TVD is the most success Ian has had since his days as Boone Carlyle on ‘Lost’ – and his character wasn’t even that important to the storyline after the third season.

Nikki Reed would probably throw a fit if hubby’s ex-girlfriend Nina returned to the faltering CW drama. Nina back on The Vampire Diaries might spell trouble for the couple’s barely year old marriage. Ian married Nikki on the rebound after Nina ended their three year relationship.

Do fans want The Vampire Diaries to continue even if Nina Dobrev agreed to come back to the show? Maybe it’s time for everyone to pack it all in and lay TVD to rest. Ian Somerhalder and Kat Graham may have the right idea. Go out before they show you the door.