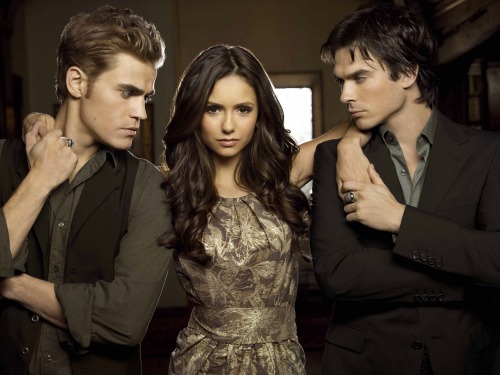 ‘The Vampire Diaries’ season 8 spoilers have fans imaginations running wild. Nina Dobrev hasn’t confirmed a return to TVD for the Season 8 series finale, but if executive producer Julie Plec has her way Elena will be back and there’s buzz that there will be an Elena and Stefan [Paul Wesley] reunion.

A Stelena reunion could open the door to a yet another reunion – Klaroline – Caroline [Candice King] and Klaus [Joseph Morgan].

Here’s what we think may happen during season 8 of The Vampire Diaries. Damon [Ian Somerhalder] turns dark and pushes Elena away when she returns to Mystic Falls. A brokenhearted Elena will seek comfort from Damon’s brother Stefan who just so happens to be Elena’s first love.

Klaus left Caroline behind in Mystic Falls telling Caroline he would be her last love. ‘The Originals’ fans have been clamoring for a Klaroline reunion ever since it was announced that season 8 of ‘The Vampire Diaries’ would be the series finale.

Previous TVD spoilers for the season finale tease that Ian Somerhalder will be put on the back burner, Damon reduced to a minor character. Everyone knows Ian has absolutely no desire to work with ex-girlfriend Nina Dobrev, the actor made that quite clear at Comic Con 2016.

What an interesting twist to the series finale of ‘The Vampire Diaries’ if Stefan is the one who rescues Elena from whatever hell she has been in. The couple realizes they should never have parted company, and a Stelena reunion takes place.

Caroline is left out in the cold, but she has always known Klaus would be back to reclaim her love one day. Klaus arrives in Mystic Falls just in time to heal Caroline’s broken heart and ‘The Originals’ fans get what they want – their beloved Klaroline back together again.

There has even been talk that Nina Dobrev will either join the cast of ‘The Originals’ season 4 or perhaps make a few cameo appearances. Not as Elena Gilbert, but perhaps Katherine Pierce. Why not bring Caroline to New Orleans too? Come back to CDL for The Vampire Diaries news and updates!

Two Nina’s and a Zac. The killer trifecta. Nothing but LOVE for these two. Watch us love some designs and some others…not so much. TONIGHT on @projectrunway at 9pm on @lifetimetv 😁🙋🏻😘 @zacposen @ninagarcia #SelfieGameStrong💪🏼

Home is where these two are… ❣️