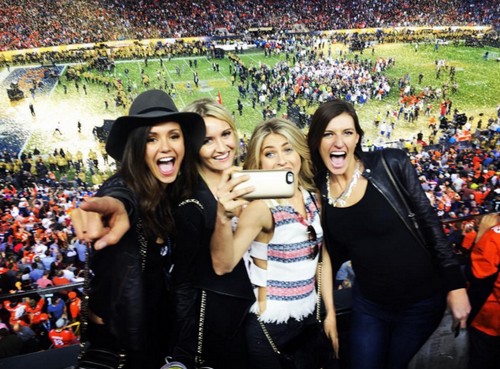 Nina Dobrev has had a lot of time on her hands since quitting The Vampire Diaries – and she has been putting it to good use, and devoting her energy to making her ex Ian Somerhalder insanely jealous and driving his wife Nikki Reed mad.

Just in case Ian forgot what he gave up when he married Nikki Reed, Nina starred on Spike’s wildly popular show Lip Sync Battle and gave him a reminder while she was grinding on NFL star Tim Tebow on stage.

In an all new video clip of Nina Dobrev and Tim Tebow’s Lip Sync Battle, the ex Elena Gilbert performs the classic song “Let’s Get it On,” – and then she proceeded to try to “Get It On” with Tim Tebow on stage.

Even though Nina was supposed to be competing against Tim Tebow, she managed to include him in her performance and began dancing provocatively and grinding on his leg. Apparently, Tim’s vow of chastity means nothing to Dobrev.

Ian Somerhalder has most likely been watching video clips of his ex having her way with Tim Tebow’s leg on repeat. Nothing says “I’m over you” like grinding on a man that is “saving himself for marriage” on national television.

By now Ian has to have grown a little bored spending his weekends at organic farmer markets and playing with his and Nikki’s pet horse – The Vampire Diaries star is probably beginning to miss Nina’s wild side, which Nikki Reed seems to be lacking. Sadly, Nikki knows it – and that is why she is obsessed with Nina and has probably watched the video of her on Lip Sync Battle more than her hubby has.

What did you think of Nina Dobrev and Tim Tebow’s performance? Is Ian Somerhalder jealous? Could the rumors be true – and he is starting to miss his easy-going and fun ex Nina Dobrev? Or is Nina just embarrassing herself at this point and trying too hard to make Ian jealous? Let us know what you think in the comments below!