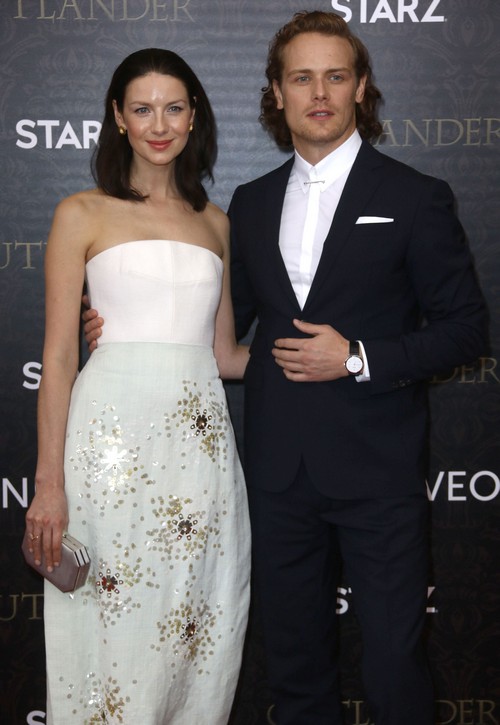 Are Outlander stars Catriona Balfe and Sam Heughan a hot couple dating in real life? ‘Outlander’ is one of the hottest series on television right now, so it’s no wonder that fans are interested in what’s going on both on-screen and off-screen for the show’s stars.

In fact, fans have long speculated that Sam Heughan and Catriona Balfe’s relationship is the reason why they have so much chemistry together, yet they’ve been forced to deny dating rumors for months now.
Sam Heughan and Caitriona Balfe know that people want to see them together, and that’s why they’ve been playing coy about their relationship, while keeping the truth well hidden under the radar and away from the paparazzi cameras.

Back in January 2016, Caitriona Balfe denied dating rumors by telling E! Online, “We’re not together. We’ve always said from the get go that we’re incredibly great friends. And to have that friendship and that closeness and to be able to get along as we do on set, it’s great that we’re able to get along that well. We’re not together. I’m sorry to break people’s hearts. They like to try to maybe replicate the Claire and Jamie story. But I think it would be difficult for us to work together and be together.”

And yet, here we are several months later and fans are still speculating on the status of their relationship, mostly because Sam Hueghan and Caitriona Balfe always look so comfortable with each other on Outlander.

Plus, other famous on and off-screen couples such as Robert Pattinson and Kristen Stewart along with Jamie Dornan and Dakota Johnson have been forced to deny any hook-ups, yet everyone knows it wouldn’t be easy for two incredibly good looking actors to not keep their hands off of each other when the cameras aren’t rolling.

Fans can’t help but notice how the on-screen Jamie and Claire are always calling each other, “babe,” and “darling” during their joint interviews. Two people who are simply ‘frinds’ don’t call each other pet names unless of course they are definitely hooking up.

Tell us CDL readers, do you think the Sam Heughan and Catriona Balfe dating rumors are true? Or is the pair just playing games with the media? Whatever they are doing, it’s working, as fans can’t get enough of them.

Can Catriona Balfe really resist Sam Heughan’s flirting and his major sex appeal? Or is the couple keeping things quiet in order to continue building interest in both Jamie and Claire’s story along with their off-screen personal lives? Drop us a line with your thoughts in our comments section below!

Sam Heughan out and about in New York City, New York on July 20, 2016. He appeared to be in a great mood as he flashed a quick smile. Image Credit: FameFlynet