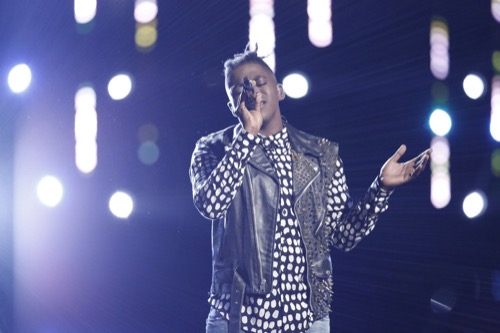 Paxton Ingram of Team Blake chose to perform live “I’d Do Anything for Love (But I Won’t Do That)” by Meatloaf this week for his Top 8 song performance. Did you watch tonight’s show? In case you missed tonight’s show, CDL has you covered – read our full and detailed recap right here! And if you missed any of the videos – check those out right here.

On tonight’s Top 8 episode, Paxton sang “I’d Do Anything for Love (But I Won’t Do That)” by Meatloaf as his live performance and this is the judges’ comments about his performance:

“Team Blake’s Paxton Ingram is next and is thrilled to meet Pink. Paxton is riding high off his Instant Save and has chosen I’d Do Anything for Love by Meatloaf. Pink says attempting a Meatloaf song is b*allsy and she couldn’t sing one of his.

Christina says she wouldn’t have expected him to choose Meatloaf but he pulled it off and says he’s energetic and she was entertained. Pharrell says he took it to the next step and says it was very theatrical and thinks he’d be good on Broadway.

Coach Blake says oh my gosh, he’s never been more proud of an artist that he’s worked with on the show. He says he doesn’t know anyone who works harder than Paxton at always making it the best performance he can do.”

Check out the full video below – and share your comments on Paxton Ingram’s Top 8 performance. Do you think Paxton can win it all? If you missed any of the Top 8 performances – you can see them all right HERE! Share your thoughts in the comments below on tonight’s finale performances for The Voice Season 10 Top 8.