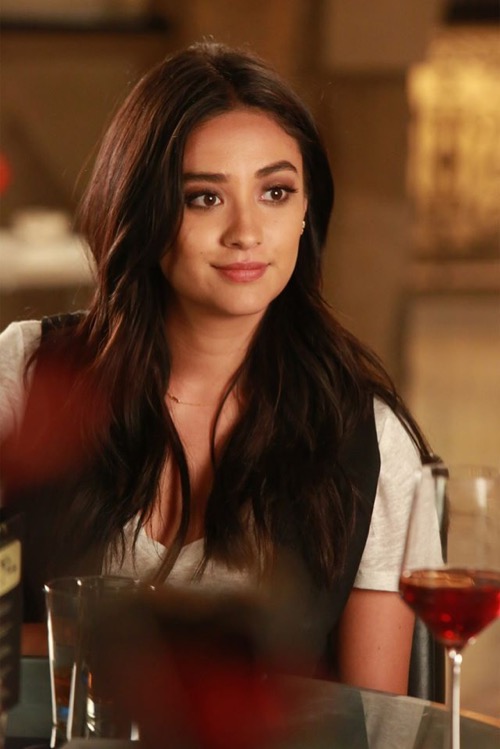 Pretty Little Liars returns to ABC Family tonight with an all new Tuesday March 15, season 6 episode 20 called “Hush, Hush, Sweet Little Liars” and we have your recap and spoilers below. On tonight’s episode, in the sixth-season finale, Ezra (Ian Harding) completes his book and old feelings between him and Aria (Lucy Hale) resurface.

On the last episode, after Alison was confronted with a sudden, mysterious jeopardy, the Liars decided to take things into their own hands for a counterattack. Hanna and Caleb worked together to develop a plan to come face-to-face with the tormentor. Emily and Spencer teamed up to investigate if Mona had any involvement with the murder. Aria and Ezra continued to work on the book though it might be more difficult than anticipated. Did you watch the last episode? If you missed it, we have a full and detailed recap right here for you.

On tonight’s episode as per the ABC Family synopsis, “after Alison is confronted with a sudden, mysterious jeopardy, the Liars decide to take things into their own hands for a counterattack. Hanna and Caleb work together to develop a plan to come face-to-face with the tormentor. Emily and Spencer team up to investigate if Mona had any involvement with the murder. Aria and Ezra continue to work on the book though it might be more difficult than anticipated.”

The season 6 finale of PRETTY LITTLE LIARS is going to be really exciting and we’ll be recapping it for you right here.

Tonight’s Pretty Little Liars Season 6 finale kicks off where we left off last week – Hanna Marin just texted “A” and told them to leave her friends alone, she “killed Charlotte.” (Obviously, we know Hanna is bluffing, they are trying to lure the stalker out of hiding.) Hanna gets a text message back – “A” (who they think is Sara Harvey) took the bait. She warns Hanna that if she is lying, she will “shoot all of her friends” and not to involve the police, and then they set up a meeting place and time.

At Alison’s house, her new husband Elliot is waiting on her hand and foot as she recovers from her fall down the stairs. Elliot says that he talked to her brother Jason – he has been hard at work at Charisimi and making sure all of the money they raise is being used to tell people. Elliot wants to stay with Alison, but she tells him that she will be fine and orders him to go to the airport before he misses her plane to Chicago.

Spencer meets up with Toby to go over the blueprints at the Radley – Sara Harvey just checked back in, and Spencer wants to find whatever it is that Sara is looking for first. They are plotting, and flirting a little. Toby plans to get Sara locked out of her room “on accident” so that Spencer can sneak inside. Meanwhile, Emily and Caleb are working together and preparing to build an electric fence – whatever their plan is to capture the new “A,” it’s going to be huge.

Despite all of the “A” drama – Aria managed to find time to go to Ezra’s so that they can work on their new book. Ezra gets emotional while he is writing the last chapter, and Aria catches him crying. Ezra breaks down, he can’t believe that Nicole is really gone. Aria comforts him, and tells him that their book is a really beautiful love story for Nicole.

Alison is dozing off on her couch and watching TV – but she hears music playing and gets up to investigate. Someone opened the music box in her room, she hears floorboards creaking and spins around – she sees her dead mother Jessica standing there, covered in dirt. Alison rubs her eyes and looks again – and her mother is gone. She thinks that it is all in her head. Alison returns to the livingroom and the phone rings, it’s Jessica on the other end of the line, she creepily asks “Did you miss me?” Alison gasps and hangs up the phone.

Later, Emily comes over and she and Alison talk about her dream. Emily had similar experiences after her father died. But, when Emily saw her Dad – it was a good dream, he wasn’t evil. Emily tells Alison that it is all in her head, it must be a side effect from the pain killers that she is on.

Spencer’s mom campaign headcenter is going crazy – the polls are opening and they are down to the wire. Spencer is shocked when Mona shows up and volunteers to help. She insists that she wants Veronica to win and wants to help. Spencer reluctantly lets Mona man the phones. Meanwhile, Toby breaks the news to Yvonne that he can’t make it to her mom’s campaign party because he “has to help a friend.” Yvonne knows that he is talking about Spencer, and she is not happy. Out in the woods, Hanna and Caleb are setting up the electric fence and cameras at the place where she is supposed to meet the new big bad “A.” Even if they don’t trap “A” with the fence – they will at least be able to get a photo of her and know who they are dealing with.

At Alison’s house, she is sleeping, and Aria is helping Emily babysit. Aria brought along her and Ezra’s book – Emily thinks that it is amazing. They hear a scream upstairs and rush to find Alison. She’s hiding in the corner and freaking out. Alison cries that she woke up and saw Detective WIlden in bed with her – he touched her hand, and Alison felt it. Emily heads downstairs to call Elliot – something is definitely not right with Alison. The next morning Emily leaves Alison alone for a little while so that she can go vote – Alison is still seeing visions of her dead mother and dead WIlden – she screams at them that they aren’t real and to leave her alone.

Aria heads over to Ezra’s he has great news, he just got off the phone with Julian and she loved their book, she is pushing up the release date and they are even getting a book tour. Aria is so excited that she kisses Aria. Both of them are stunned for a moment – then they start ripping each others clothes off and make their way to the bedroom and start hooking up.

Emily heads back to Alison’s house after she is done voting and Alison is gone. Alison’s phone is ringing – it’s Elliot – Emily picks up and tells him that she has no idea where Alison has gone.

It’s getting late, the polls will be closing soon and the votes will be tallied. Melissa has been blowing up Spencer’s phone all day to see how their mother did. Veronica thanks Spencer and her dad for all of the sacrifices that their family made for her campaign. Spencer gets a frantic phone call Emily – she still can’t find Alison. Spencer tells Emily that she is on her own, the plan is already in motion. Spencer and Toby are about to break in to Sara’s room – and Hanna, Caleb, Aria, and Ezra are at the Lost Woods waiting for “A.”

Meanwhile, Hanna and Caleb are alone in the hotel room at the Lost Woods. They have a heart to heart, Hanna recalls their break-up. She reveals that she came back for him the night that they broke up, but Caleb was already gone. She cries that things weren’t supposed to be like this and confesses that she is still in love with him. Caleb leans in and kisses her – they jump apart when Ezra and Aria walk in.

Toby and Spencer are in the basement of the Radley, they think that they may have found a secret room that Charlotte used when she was staying there – and whatever is in the secret room is what Sara Harvey has been looking for. Toby has brought along his tools so that they can get in to the secret room because the door has been sealed shut.

Emily finds Alison hiding in the church and having a meltdown. She cries that she is being punished for all of the bad things that she did in her life. Emily tries to convince her that it is just the medication talking and her mom and Wilden are not back from the dead.

Meanwhile, Mona finds Toby and Spencer in the basement. She tags along with them as they head in to the secret room – all that is in there is a dusty old file from over 20 years ago. The patient’s name is Mary Drake, and it turns out that Mary Drake was Charles’ real mother – the DiLaurentis family adopted him and lied and said that he and Jason were twins.

At the Lost Woods, Hanna is sitting in the hotel room all alone and waiting for “A” to arrive. Ezra, Aria, and Caleb are hiding in the woods and waiting. They hear their trap going off and they rush to the fence – but no one is there, somehow “A” got right through the electric fence and cameras. They run back to the hotel room and Hanna has vanished.

Alison decides to check herself in to the mental hospital. Emily tags along and tries to convince her to wait for Elliot to get home. Emily is scared that once Alison checks herself in, the doctors won’t let her out. Alison won’t listen – the doctors helped Charlotte get better, and Alison thinks that they are going to help her get better too.

Back in Rosewood, everyone is celebrating – Veronica Hastings has won the Senator election. Spencer and Toby sneak back upstairs to celebrate with everyone, Spencer gets a frantic phone call from Aria and learns that Hanna is missing. Spencer and Toby rush to the Lost Woods – they find Caleb and Aria in the hotel room fre aking out. Apparently, “A” had tunneled underground and came up through the floor and grabbed Hanna and disappeared. They watch the videos from the woods, and they see one person running frantically through the woods on camera. Everyone is shocked, “Can that even be possible?” Aria asks out loud. It’s Mrs. DiLaurentis.

Back at Alison’s house – Wilden is walking around, apparently Alison wasn’t seeing things. Wilden takes off his mask, it’s not Wilden at all….it’s Alison’s husband Elliot. Mrs. DiLaurentis is there too. Only, it’s not Jessica, it’s her twin sister, Mary Drake and Elliot is her son. Apparently, Elliot and Mary Have been plotting to get back their half of the Charisimi Group from the DiLaurentis Family, Elliot even went as far as to marry his cousin. And now that Alison is in the mental hospital…Elliot has control of her half of the company.

Tonight’s episode ends with “A” dragging Hanna across the ground – she appears to be unconscious, and is clutching bouquet of flowers. “A” texts Aria and the other liars and says, “Thanks for giving me Hanna, you are free to go now – AD”