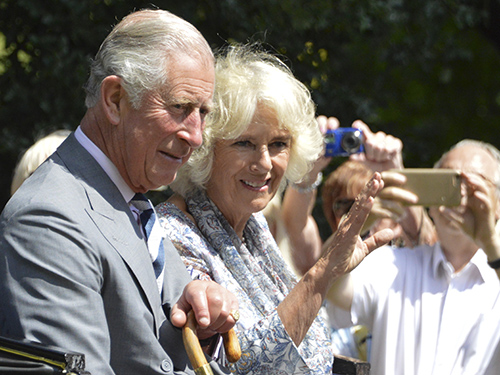 Prince Charles and Camilla Parker-Bowles have yet another reason to worry about what the media might write about them each and every time they make another one of their public appearances. And it’s not about what they say or do or how well they are dressed, but whether or not they ‘stink.’

In fact, there’s a new report that says the Prince of Wales and the Duchess of Cornwall make an effort to stay away from garlic whenever they can simply because they don’t want rumors spreading of how poorly they smell, especially during their royal engagements.

According to Britain’s The Telegraph, Prince Charles and Camilla avoid spicy foods at all costs and mainly stick to meals they are well-accustomed to such as British dishes as they are worried that they might come off as a ‘stinky’ couple. In fact, even Camilla’s son, food writer and critic Tom Parker Bowles, admits that their social anxiety has gotten the best of them, especially whenever they are expected to dine with others.

It’s also one of the reasons why the seasoned cook can’t serve any meals with ‘endless spices’ to both his mother and the future King of England. He said, “As she [the Duchess] has got older, garlic and chillies are especially a no-no. You can’t go stinking of garlic when you are shaking hands the next day. I usually wouldn’t cook… most my food has chili in it or endless spices and no, no I wouldn’t do it.””

Of course, it wouldn’t surprise anyone that Prince Charles and Camilla Parker-Bowles are worried about what the public might think of them, should someone complain about their hygiene and their unpleasant or foul smells. After all, rumors about the royal family usually spread like wildfire and the last thing the Prince of Wales and Duchess of Cornwall need are stinky reputations, especially since they’ve worked so hard to get to rid of their ‘stiff upper lip’ stigma by appearing less rigid and more natural in public.

Sure, they might not be as popular as Kate Middleton and Prince William or as likeable as Prince Harry, but they also have every reason to stick to their strict dietary rules, even if it makes them come off as antisocial.

Garlic and onions are usually linked to bad breath while chillies have side effects like sweating. And knowing how the public is watching their every move during their royal engagements, Prince Charles and Camilla Parker-Bowles don’t want to be the royal family’s next laughing stock, especially if the tabloid media finds out about it.

Let us know what you think and of course, check back with CDL for all the latest updates on the British royal family right here.