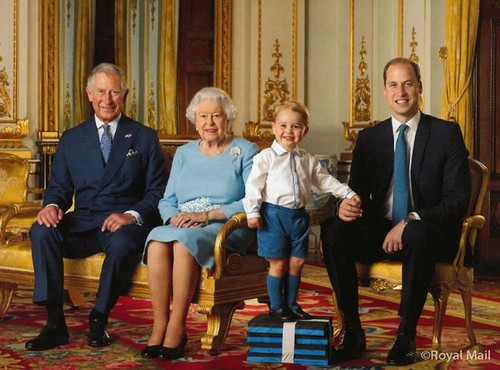 Without-a-doubt, Kate Middleton’s son, two-year-old Prince George is cuteness personified and his grinning face in an adorable new portrait can light up a room.

The darling royal posed standing on foam blocks with three older generations of direct heirs to the British throne. Prince George turned on the charm during a Royal Mail photo-shoot for a stamp sheet in order to mark Queen Elizabeth 90th birthday.

This marks Prince George’s first appearance on a British stamp.

In order to ensure the little royal was more or less on the same line as the older generations, Mackechnie used high-density foam blocks to lift George into the frame.

This is not the first time we’ve seen a photo of George this year. The other pic came on March 7 when the little prince accompanied his dad, Prince William and mom, Duchess of Cambridge Kate Middleton, on his first ever ski trip to French Alps. George’s sister, 11-months-old Princess Charlotte too joined them on the trip.

However, the little royal did not accompany his parents on their recent trip to India.

When asked why Prince George didn’t join them, Duchess of Cambridge said, “Because George is too naughty. He would be running all over the place.”

The Royal Mail released the four first-class stamps on a single sheet. In addition, there are six special stamps to observe Queen’s birthday.

Three of the aforementioned stamps focuses on Her Majesty’s family life; including one of her with her children, and with her father, King George VI for the first time. One of the stamps shows the Queen as a young mother, accompanied by Prince Charles and Princess Anne, another one shows her with her husband of 68 years, Prince Philip.

The other three stamps shows the Queen with the late South African president Nelson Mandela, marking her official role and showing her as Head of State for the opening of Parliament and as Head of the Commonwealth.

“He walks like George!” – The Duke of Cambridge and Prince Harry watch footage of their father as a child #Queenat90https://t.co/qSlZOjp5OP