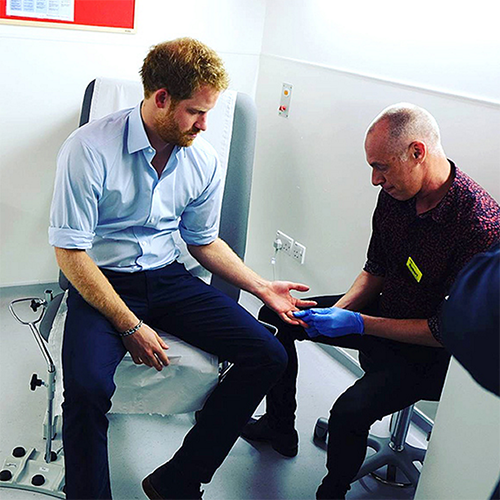 Prince Harry made a secret visit to the Mildmay Mission Hospital where HIV and AIDS patients are treated. This is the same hospital Princess Diana made famous when, in 1989, she shook hands with and kissed an AIDS patient on the cheek. By doing so, Diana began the initiative to remove the stigma surrounding HIV and AIDS.

This isn’t the first time Harry has made a visit to Mildmay Mission Hospital. In December 2015, the ginger-haired prince officially visited the hospital. During the December visit, Harry pointed out that Diana often visited the hospital in secret. “If only I could do that!” the prince remarked. It appears that Harry has managed at least one visit of which the paparazzi were unaware.

This time around Prince Harry did manage to sneak in and out just as Diana did so many years ago. During the recent follow-up visit, Harry was able to spend more time with the staff and patients, learning about and understanding the work that is done at the health care facility.

Juley Ayres, communications manager at Mildmay told People, “As an organization, we are deeply impressed and heartened to witness the work Prince Harry is doing to break down the stigma [of living with HIV], encouraging testing and raise HIV awareness. We feel privileged to be able to support this work in any way we can.”

Princess Diana would be proud that Harry has taken up the cause for HIV and AIDS awareness. Connecting with Harry’s message, the number of people who sought HIV testing increased significantly following the release of the video of Harry’s public HIV test in July.

Kate Middleton and Prince William have focused more on mental health issues, another cause that was important to Diana. The Duke and Duchess of Cambridge are patrons of Heads Together. Kate is a patron of Place2Be. Princess Diana admitted to suffering from an eating disorder, brought on by depression and anxiety.

Prince Harry appears to have mastered Diana’s ability to quietly visit Mildmay Mission Hospital. Is it possible that Kate Middleton and Prince William may join Harry on a visit from time to time?

Harry has supported the Cambridge’s charity Heads Together. Wouldn’t it be wonderful if Kate Middleton and Prince William were to join Prince Harry in carrying on Princess Diana’s legacy of spotlighting HIV and AIDS awareness?