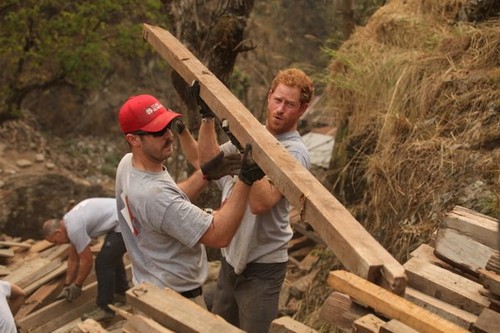 Kensington Palace kept Royal watchers up-to-date with Harry’s activities while the ginger-haired prince was in Nepal. Harry joined Team Rubicon UK to help villagers with the ongoing work to temporarily rebuild a school in anticipation of monsoon season.

Team Rubicon UK was happy to have Prince Harry’s help in rebuilding a school and other structures that had been destroyed during an earthquake in 2015.

The mission statement of Team Rubicon UK reveals that the organization exists in order to unite skills and experiences of military veterans with first responders to rapidly deploy emergency response teams.

Harry is out there getting dirty and sweaty and quietly making a difference in the world. All the while Kate Middleton has been given a pass for the past few weeks in order to spend time with Prince George and Princess Charlotte.

After all, the Duchess of Cambridge is going to be separated from the children for six whole days while in India and Bhutan with Prince William. 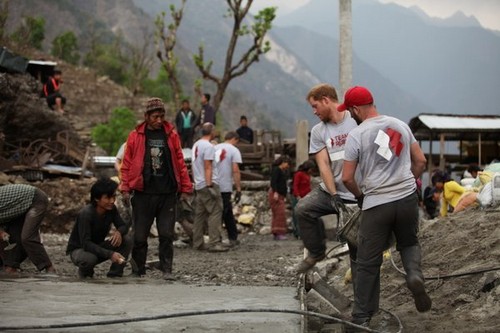 Prince Harry has been compared to his aunt Princess Anne quite a bit this week. The second born child, and only daughter, of Queen Elizabeth, Anne has always stepped in and taken on Royal responsibilities that were not as glamorous as those of Prince Charles.

While at work the prince donned t-shirts, jeans, gloves and caps and did some heavy lifting. Harry stayed with local family and enjoyed an evening meal with a war widow. He donned a hospital gown and visited sick children at the Kanti Children’s Hospital in Nepal.

Prince Harry’s donned a suit and tie in order to deliver a speech at the end of his official tour and pay tribute to what Harry called “this remarkable country.”

Prince William and Kate Middleton have taken on many patronages but none quite like Prince Harry. The fifth-in-line to the throne doesn’t seem to care what he’s wearing as long as the work he is doing makes a difference in the world.

Perhaps the future King and Queen should take a page out of Prince Harry’s book. Come back to CDL for more news on The Royals!

Prince Harry joined @TeamRubiconUK at the end of his tour to Nepal to support their earthquake-relief project pic.twitter.com/tD6XZhpvcX