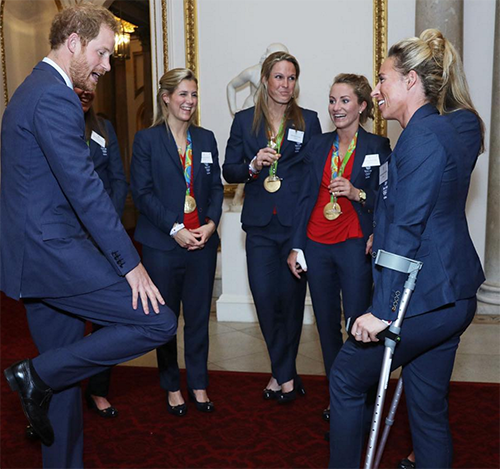 Georgie Twigg turned on the charm when the Olympic Gold medalist met Prince Harry at the GB Heroes reception held at Buckingham Palace on October 18. The world’s most eligible bachelor seemed quite smitten with the beautiful blonde. But, can the prince compete with Georgie’s long-time love Iain Lewers?

Iain and Georgie have been together since the 2012 Summer Olympics held in London. They’ve been called the “Posh and Becks of British hockey” and the Brits seem to adore them. But the public has been rooting for Prince Harry to find a suitable bride for a long time. Would Georgie turn down her current boo to date handsome Harry?

Prince Harry does have a type – blonde, leggy, attractive, and athletic. Georgie Twigg fits all those requirements. Not only is Georgie all those things, the GB Olympic Hockey Team star is intelligent.

Georgie studied law at Bristol University and graduated in 2012. Georgie then went on to complete her Legal Practice Course with distinction and has a contract with the international law firm of Bird & Bird.

Sound familiar? Harry’s ex-girlfriend, Chelsy Davy, studied law at the University of Leeds. Chelsy practiced as a trainee attorney for a bit with the London law firm of Allen & Over but has since quit that job to become a jewelry designer.

Kate Middleton would probably be thrilled if Georgie dumped Iain Lewers and began dating Prince Harry. That would keep Harry from being tempted to go back to Cressida Bonas. Kate despises Cressida. And no wonder, Isabella Calthorpe, the socialite Prince William shamelessly chased after during his short break-up with Kate Middleton, is Cressida’s half-sister.

As far as we know, Georgie has no ties to any of Prince William’s exes, which is great news for Kate Middleton. No awkward moments where the Duchess of Cambridge would be forced to smile and make nice with a sibling, half-sibling or friend William may have bedded in the past.

We know Georgie Twigg would have the stamina to keep up with a demanding schedule filled with Royal responsibilities. Training to be an Olympic athlete certainly prepares one for the multitasking required of a Royal wife. 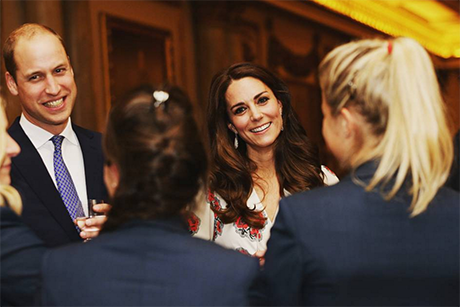 Prince Harry has expressed that any woman he dates is in for much scrutiny. Georgie’s been in the public eye for quite a few years and we think she could handle the pressure that comes with dating a Royal.

But Georgie Twigg and Iain Lewers have been together four years and appear to be deeply in love. Is Georgie ready to give up her tennis career, and Iain, for Prince Harry? The way she charmed the prince at the GB Heroes reception makes it seem as if Georgie would jump at the opportunity to become Prince Harry’s next girlfriend – and perhaps a Royal bride. Come back to CDL for all your Royal news and reports!

Wow what an unbelievable honour to have a Royal reception at Buckingham Palace!! @RoyalFamily @_GBHockey pic.twitter.com/Y9pAJN51z5

Watch highlights from tonight’s Olympic @teamGB and @ParalympicsGB_official reception at Buckingham Palace, hosted by The Queen and The Duke of Edinburgh, and attended by The Duke and Duchess of Cambridge and Prince Harry. #GBHeroesLDN