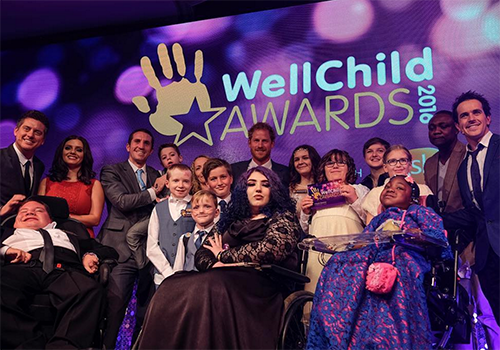 Prince Harry is back in the media spotlight now that Prince William and Kate Middleton’s week-long trip to Canada is finally over. Prince Harry was spotted attending the Wellchild Awards in London this week, once again showing off his charm and charisma for the cameras as he showered ill children with plenty of love and adoration.

While Prince William and Kate Middleton did what they do best during their trip to Canada – and that’s smile, wave, and look interested enough in whatever event they are attending for the cameras – Prince Harry takes things one step further by actually interacting with his fans and those in need. While the Duke and Duchess often kept their distance from others, Prince Harry got on his knees, passed out hugs, made silly faces, and actually held the kids he met during the Wellchild Awards. There are even plenty of fans comparing him to his late mother, Princess Diana, who many say would be so proud of the dedication he puts into his work and royal engagements – unlike his brother and his wife.

In fact, according to the BBC, Prince Harry made a rather special connection with a 5-year-old boy named Ollie Carroll, who has a diagnosis of Batten disease. The young boy cannot stand by himself but his mother says that he “used all of his strength to stand up and throw his arms around Prince Harry.”

Of course, there’s no doubt that Prince William and Kate Middleton would never make the same effort Prince Harry has made to learn about the children he met at the Wellchild Awards. The Duke and Duchess love to talk about their children, Prince George and Princess Charlotte, to make them look more like ‘relatable’ parents, but they’ve never been closer than an arm’s reach to another child that wasn’t their own. In fact, no one in Canada was excited to see Prince William and Kate Middleton the same way the children reacted to Prince Harry in London.

It wouldn’t surprise anyone if the citizens of Canada would rather have Prince Harry visit their country than William and Kate again. Tell us CDL readers, do you think William and Kate are once again envious of Prince Harry and the positive media attention he gets? Do you think the Duke and Duchess are stiff and distant in comparison to Prince Harry? Let us know your thoughts and of course, check back with CDL for all the latest updates on the entire British royal family right here.

Prince Harry meets five year old Ollie, who tonight wins a @wellchild Inspirational Child Award. Ollie was born a normal healthy baby, but from the age of two he developed problems with his walking and speech and was eventually diagnosed with the rare genetic condition Battens Disease. One of Ollie’s nominators described him as the “loveliest and happiest boy in the world, despite the daily battle he faces.” #WellChildAwards

Abracadabra! Thank you Mikayla for the beautiful flower for Prince Harry – tonight The Prince joins @Wellchild to celebrate the courage of seriously ill children and those who care for them at the #WellChildAwards