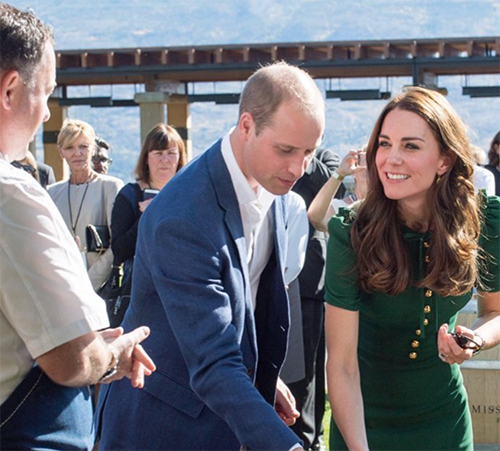 It looks like not everyone is making the time to wine and dine with Kate Middleton and Prince William during their trip to Canada this week. In fact, there’s a new report that says the Duke and Duchess of Cambridge have been completely snubbed by a senior community leader for Canada’s indigenous people.

Kate Middleton and Prince William might be the world’s most popular royal couple, but they certainly didn’t get the royal treatment from Okanagan Nation Alliance Chairman and Grand Chief Stewart Phillip, who pulled out of his meeting with them at the very last minute. Sources say that he changed his mind simply because he felt as though the event was being made a “charade” and that it “masked the true relationship” between Canada and its indigenous people.

Yet, the Duke and Duchess of Cambridge didn’t let the situation spoil the rest of the day, especially since Stewart Phillip’s replacement Chief Jonathan Kruger stood in for him. But then again, would someone like Kate Middleton really be worried about being snubbed by a major senior community leader?

For the Duchess, it was business as usual. She showed off a pricey $3,500 Dolce and Gabbana dress while later speaking to schoolchildren at a food and wine festival. Sure, Kate Middleton and Prince William’s trip to Canada is an official state trip, but as always, they are expected to be treated like Hollywood celebrities wherever they go. It’s no wonder that Canadian citizens aren’t too pleased that they are funding yet another one of Kate and William’s lavish vacations while they smile, wave and dine with the Canadian elite.

Even before their private jet touched down on Canadian soil, Prime Minister Justin Trudeau and his wife, Sophie Trudeau, were there to greet Prince William and Kate Middleton and their children Prince George and Princess Charlotte as if they were nothing less than the world’s most important celebrities. It’s unsurprising that the Duchess uses every opportunity to use her royal engagements as fashion shows: She knows that every camera is looking at her at all times. After all, what else does she have to offer?

Sure, Kate Middleton and Prince William might have been snubbed by an important leader who wanted to make an important political statement, but the royal couple managed to remain unfazed by the incident. Tell us CDL readers, what do you think? Drop us a line with your thoughts in our comments section below.

90-year-old telegraph operator Doug Bell tapped out a message for The Duke and Duchess to launch MacBride Museum’s new @Telegraph_Tweet. The message, the first entry for the digital guest book, reads: THE DUKE AND DUCHESS OF CAMBRIDGE, SEPTEMBER 2016, WHITEHORSE YUKON.

Great to meet so many UBC athletes (and Scorch the mascot!) in Kelowna today as the campus celebrates its 10 year anniversary #RoyalVisitCanada 🇨🇦 Image © PA

Day Three of #royalvisitcanada saw The Duke and Duchess welcomed by the Heiltsuk Nation Community of Bella Bella, walking the beautiful trails of the Great Bear Rainforest fresh from a rain storm, and newly dedicated as part of The Queen’s Commonwealth Canopy, and attending a reception at Government House in Victoria hosted by the Province of British Columbia. What an incredible day! Thank you to everyone who made it so special.