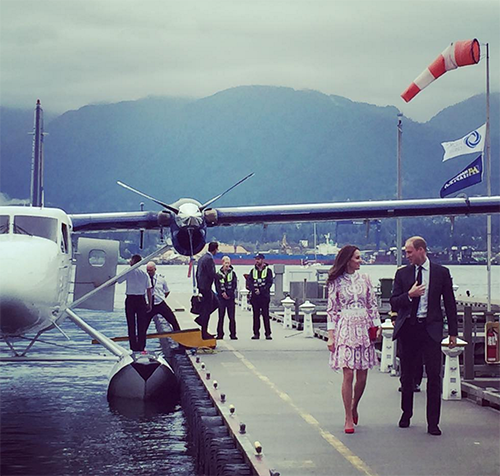 Are Kate Middleton and Prince William truly in love after five years of marriage together? Or is the royal couple using their deceitful gestures to fool the public with their body language? That’s what both fans and critics alike can’t help but wonder as the Duke and Duchess of Cambridge are putting on quite the amorous display during their trip to Canada.

Kate Middleton and Prince William have only been in Canada for a few short days, but already they’ve managed to capture the media’s attention by being incredibly affectionate with one another. In fact, many have event hinted that the Duke and Duchess of Cambridge are nothing like Prince William’s rigid and distant parents Prince Charles and Princess Diana, as they’ve been showing everyone just how ‘in tune’ they really are with each other.

In fact, according to the Daily Mail, body language coach Robin Kermode said, “This Canadian tour shows that William and Kate are still so in love with each other and the pictures of them together really tell a genuine love story. The couple’s body language is very synchronized with the couple almost mirroring each other. Their eye contact is better than ever and they are holding each other’s gaze, which is also a sign of being relaxed in each other’s company.”

But then again there’s also the possibility that Kate Middleton and Prince William know that the cameras are watching them and that’s why they’ve been making an extra effort to be as affectionate as possible with one another. After all, the last thing the British royal monarchy needs right now is another royal divorce and no matter how difficult their marriage might be behind closed doors, the Duke and Duchess aren’t going to show their true feelings in public.

Sure, Prince Charles and Princess Diana might have looked cold with one another while on their official royal engagements, but that’s because they weren’t as media-savvy and clever as William and Kate. The royal couple knows that every move they make is going to be well-documented and scrutinized by the media and that’s perhaps why they’ve learned how to make all the right moves, even when they are staged or calculated.

But that doesn’t mean Kate Middleton and Prince William’s marriage is on the brink of divorce. But knowing that there are a dozen photographers eyeing their every move, Kate’s smile is going to be a little wider while William’s demeanor is going to be more affectionate towards his wife.

What do you think, CDL readers? Are the Duke and Duchess using deceitful gestures to fool the public about the state of their marriage? Let us know your thoughts in our comments section below.

The Duke and Duchess visited UBC Okanagan earlier today to mark the campus’s 10th anniversary. Whilst they were there Their Royal Highnesses also watched a volleyball demonstration from the university’s women’s team. Thanks to UBC for the incredible welcome, and for The Duke and Duchess’s special jerseys! #RoyalVisitCanada 🇨🇦 Image © PA

Day Three of #royalvisitcanada saw The Duke and Duchess welcomed by the Heiltsuk Nation Community of Bella Bella, walking the beautiful trails of the Great Bear Rainforest fresh from a rain storm, and newly dedicated as part of The Queen’s Commonwealth Canopy, and attending a reception at Government House in Victoria hosted by the Province of British Columbia. What an incredible day! Thank you to everyone who made it so special.