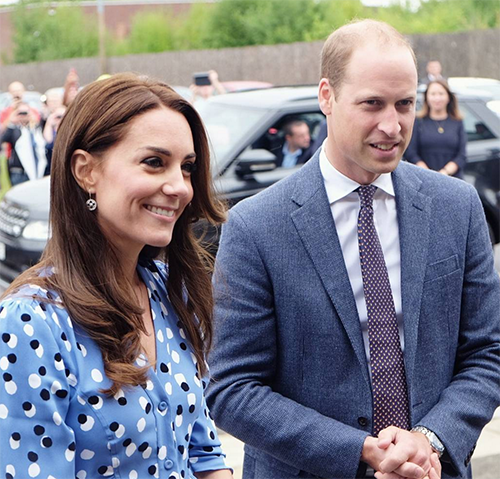 Kate Middleton and Prince William are getting a stern warning from Queen Elizabeth ahead of their much-anticipated trip to Canada. The Duke and Duchess of Cambridge are being warned not to treat their overseas trip as another one of their luxury vacations as the Queen has given them a back-to-back schedule of nothing but work and royal engagements.

Surely, the Duke and Duchess were expecting to be wined and dined by Canadian politicians and stars as they usually are whenever they embark on one of their state trips. It doesn’t surprise royal observers when Kate Middleton uses her photo ops as another one of her fashion statements in her never-ending bid for media fame and attention.

That’s probably why Queen Elizabeth wants her grandson and his wife to finally cut the nonsense and do some actual work while they are in Canada, or at least engage with locals and learn about the country’s current affairs. That’s why she’s given them an itinerary with more than 30 engagements, making this one of the most demanding trips for the Duke and Duchess yet.

According to Britain’s The Mirror, the royal couple are expected to visit the majestic Great Bear Rainforest, a visit to the immigration Services Society to meet Syrian refugees, experience a float plane, a canoe and even fish in the Canadian wilderness as well.

There’s no doubt that Kate Middleton is fuming behind closed doors over the Queen’s demanding itinerary and expectations. Obviously, she was hoping to go to Canada with the couple’s children, Prince George and Princess Charlotte, and sightsee some important Canadian landmarks and simply being present for photo opportunities like she did during their trips to Australia and New Zealand in 2014 and more recently India and Bhutan last April. This time around, the Duchess is expected to actually participate in some of her engagements instead of just smiling for the cameras before calling it a day in another lavish and luxury hotel.

Yet, one spokesperson for Buckingham Palace said that Prince William and Kate Middleton are “delighted” about their upcoming trip and can’t wait to visit Canada and learn about new parts of their country. But knowing how much the Duchess loves putting on her royal tiara and showing off yet another expensive ball gown while rubbing elbows with the elite, she might end up regretting this trip to Canada the most. What do you think, CDL readers?

Today The Duke and Duchess of Cambridge go #backtoschool with @heads_together to find out more about the pressures faced by young people going through big life changes. The Duke has written a blog about how to help young people cope with these changes – see link in bio.

The Duke and Duchess of Cambridge arrive at Stewards Academy in Harlow, one of the schools supported by Place2Be – a charity that offers one-to-one mentoring for emotional wellbeing in schools – and a partner of the @heads_together campaign spearheaded by Their Royal Highnesses.

An incredibly warm welcome from the students and staff of Stewards Academy in Harlow, despite the rain ☔ The Duke and Duchess are visiting today to find out how the school supports students through big life changes, with the help of Heads Together and Place2Be.