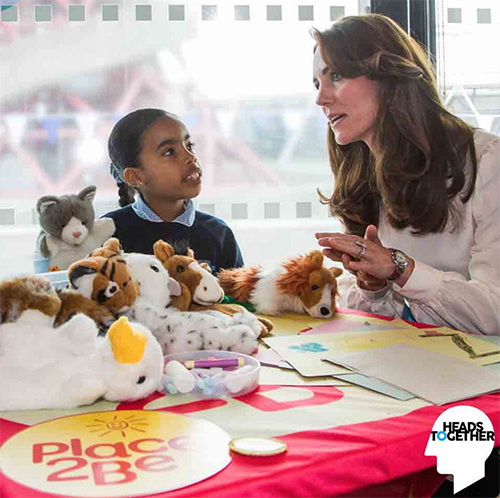 Kate Middleton and Prince William have been called the laziest Royal couple in history. At least William picked up the pace after returning from the family vacation in Balmoral. The Duchess of Cambridge decided to take some more time off, which was made apparent when the Duke of Cambridge was viewed attending some Royal functions solo.

Enough is enough, and it appears that Queen Elizabeth has ordered Kate back to work. Kensington Palace announced that Kate and William will go back to school with Heads Together. The Cambridge’s will visit Place2Be to check out how the children have been helped through the changes made by the charity.

Place2Be, which provides mental health support to children and their families, is a charity close to Kate’s heart. Time and time again, Kate Middleton has stated that, if necessary, she and Prince William would not hesitate to seek professional help for Prince George and Princess Charlotte. Obviously, Place2Be is an important part of Kate and William’s charity work.

Kate Middleton can’t sit at home at Anmer Hall or Kensington Palace and skip out on a Royal visit to Place2Be. That’s just not an option when it comes to an important event for a charity of which Kate is a patron. Queen Elizabeth isn’t going to tolerate the Duchess of Cambridge shirking her responsibilities, no matter how exhausted Kate Middleton might be.

It doesn’t matter that Kate, William, Prince George, and Princess Charlotte are preparing for a trip to British Columbia and the Yukon Territory. There are still Royal obligations that must be met back home in Britain.

Queen Elizabeth, at 90 years old, has consistently taken on more Royal obligations than Kate and William combined. If Kate Middleton wants to live up to the declaration that she is part of a Royal power couple, then it’s necessary for the future Queen to act like a Royal and less like a commoner.

Summer vacation is over and it’s time for Kate to pick up the pace and do some real work, or the accusations insinuating that the future Queen is lazy and work shy will only continue. Part of being a member of the Royal Family includes taking on a heavy workload. What do you make of Kate Middleton’s laziness, CDL readers?

When we get our #HeadsTogether, when we talk to eachother, we can achieve great things https://t.co/NR2RDZV5Xa pic.twitter.com/Z9tPJMypbJ

The Duke & Duchess will go back to school with @heads_together to see how children are supported through changes pic.twitter.com/Qmoo5azJrT