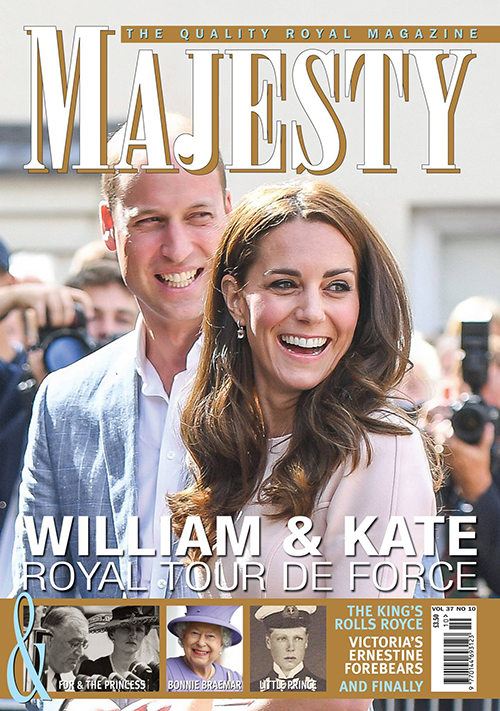 Majesty magazine’s October 2016 issue declares that Kate Middleton is a tour de force. This is the same woman that exhibited deplorable commoner behavior during recent Royal visits to Cornwall and Isles of Scilly. Now, the Duchess of Cambridge is suddenly a force with which to be reckoned.

The magazine declares Prince William is also a tour de force. Actually, the Cambridges are apparently the ultimate power couple. For the most part, the magazine that reports on all things Royal does a fairly good job. But calling Kate and William a “Royal Tour de Force?” Is that some kind of joke?

Prince Harry graced the cover of the magazine for September 2016 and was declared a “mover and a shaker” and his good deeds were detailed inside the pages of the publication. Harry hasn’t always been on his best behavior. The ginger-haired prince does like to party. But over the past year or so, Harry has earned the right to be called a mover and a shaker, don’t you think?

Have Kate Middleton and Prince William really earned the right to be called a tour de force, a true power couple in the land of royals and celebrities? Sure, the Duke and Duchess of Cambridge will one day be King and Queen, so we guess that makes them power players. But the buffoonery must end, and Queen Elizabeth will probably set Kate and William straight during the final vacation of the summer at Balmoral.

It’s not just the childish behavior that has gotten Kate and William into trouble lately. Over and over again we keep hearing that the Cambridges are lazy and work-shy. Kate looked bored to tears at a recent event for a charity to which she is a patron. William could barely hold it together to listen in on a few crisis service calls during a secret drop in at the center.

Do we really think Kate Middleton and Prince William are the ultimate power couple? Are William and Kate genuinely forces with which to be reckoned? Honestly, no. Despite the fact that William is second-in-line to the throne, he and Kate have definitely not earned the respect of British subjects. Or the world’s respect for that matter.