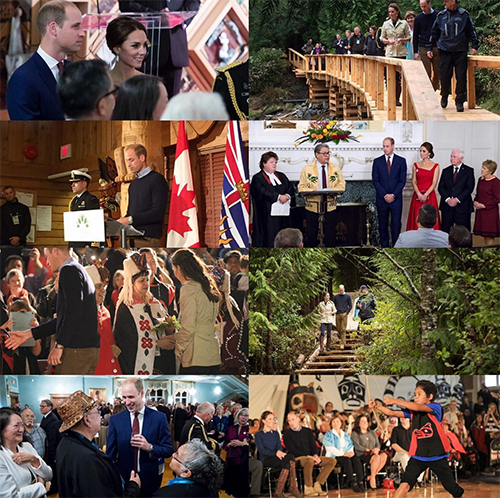 It looks like Kate Middleton has managed to embarrass Queen Elizabeth once again. This time around, the Duchess of Cambridge will no doubt get an earful from the Queen for her middle class parenting tactics that she’s used on her children Prince George and Princess Charlotte during their trip to Canada this week.

Being a commoner, there’s no doubt that Kate Middleton’s parenting techniques differ from that which were used during her husband Prince William’s childhood. And while Kate’s methods might be on par to what the average middle class mother might use on her own children, it’s not up to Queen Elizabeth’s standards.

Apparently, Kate was photographed squatting down to speak to her son Prince George after they touched down in Canada this past weekend. Prince William was scolded by the Queen when he did the same thing with George on the balcony of Buckingham Palace during the RAF display earlier this year. The royal father-of-two was publicly scolded by his grandmother when she told him to stop crouching and stand up.

While there’s no doubt that Kate Middleton wants to be seen as a modern mother who is in tune to her children’s needs, what she often forgets is that her every move is being watched and scrutinized by the public. Sure, she might think the active listening technique that she and Prince William use with Prince George might be working at home, but they are also sending a clear message to the Queen that they are raising their family the best way they see fit. After all, the royal family has just gotten off a long haul flight and landed in a country where a number of strangers were ready to meet and greet them. Of course Kate Middleton was going to bend down and reassure her 3-year-old son that he was safe and fine.

Then again, this might just give Queen Elizabeth another reason to make sure Prince William and Kate Middleton attend their next state trip without their children, as there’s no doubt that all the attention they’ve been receiving has indeed been frightening for 3-year-old Prince George and his 18-month-old sister, Princess Charlotte.

The royal children don’t need to be used as paparazzi props on their parents’ international trips when they would be better off in the care of their nannies back home and sticking to their nursery school schedule. What do you think, CDL readers? Let us know your thoughts in our comments section below.

On day three of the #royalvisitcanada The Duke and Duchess attended a reception at Government House, hosted by the Government of British Columbia.