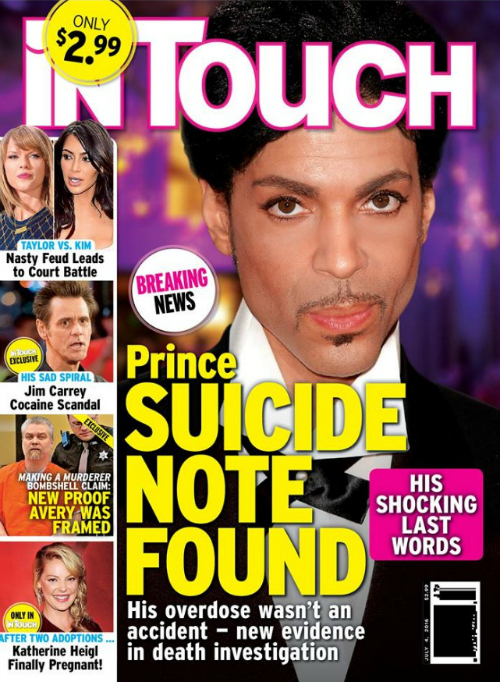 The artist Prince’s death was ruled an accident but was it an unintentional or intentional overdose because the singer was suffering too much chronic pain and had no way of being relieved of it?

InTouch has reported that a suicide note was found with Prince and that the singer took excessive opiates to end his life because of the untenable pain he was living in. The unidentified source didn’t reveal the note to authorities at the time and said it’s because Prince was a very private person.

No matter the true cause of Prince’s death, his loss is a horrible tragedy. It’s just one of many in 2016 that came too soon but will never be forgotten. The first half of this year claimed dozens of entertainment, music and film performers, some more well-known than others.

We’ve also recently lost up and coming singers whose stars barely reached their full brightness like former The Voice contestant, Christina Grimmie. The loss of artists just seems to keep on climbing.

Regardless of the why’s and how’s of Prince’s death, we know he battled his own demons with painkillers. Sad as that is, what’s worse is the struggle over Prince’s fortune that continues to rage on between his family members.

The singer never adequately planned for his demise. Death isn’t something anyone enjoys discussing. Legal experts will tell you to at least have a living will, detailing your wishes. It doesn’t matter your age. Obviously, Prince never thought he’d die so young.

If anything, his death can be a lesson to us all about how important it is to do what you can to help those left behind. Prince’s family is left now with deciding who gets what from his massive wealth. Instead of sharing their memories of him as his fans are doing, Prince’s family will continue to battle on, making sure they each gets their cut of his massive estate.

This can’t be what the Artist would’ve wanted. We’re pretty certain Prince would want everyone to remember him for his music and the joy and fun it brings to all those who hear it. He most definitely wouldn’t have wanted to have headlines splashed on front pages of how his loved ones can’t divide what he worked so hard to earn.

This suicide note talk is needless since we’ll likely never know the truth. Our best option is to remember those artists we lost and how they affected our lives and not dwell too much on the manner of their deaths. RIP Prince.

Stay tuned to CDL for all the latest celebrity news and gossip.