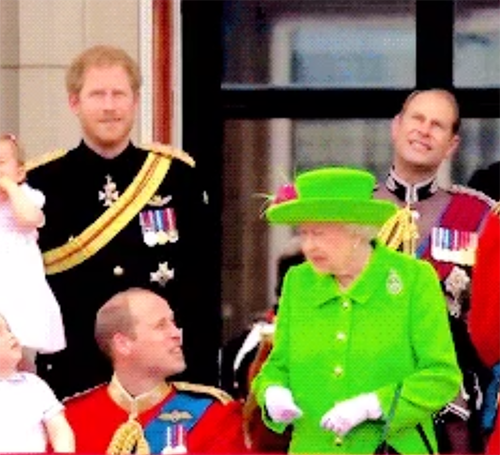 Prince William received a public scolding by Queen Elizabeth during the celebrations for her 90th birthday last weekend. No one likes being scolded by grandma. She doesn’t care what age you are or if you’re married or have children of your own. If she thinks you’ve done something inappropriate, she’ll let you know. Prince William is no exception.

The very public incident was captured on film while the entire royal family stood on the balcony of Buckingham Palace waiting for the RAF air display to fly by. Prince William is kneeling beside his son, 2-year-old Prince George.

The Queen doesn’t appear to be very pleased with the second in line to the throne. In the footage, she taps William on the shoulder then gestures upward with her hands, apparently telling him to get up. And indeed, she does say: “Stand up, William.” He obeys, appearing quite sheepish in the prospect. He dare not ignore his granny, now or ever.

This was a significant year for the Queen. Not only was it her 90th birthday, but Princess Charlotte also made her debut appearance on the balcony with her older brother. Earlier in the day, Prince William and his wife, Kate Middleton, participated in the Trooping the Colour Parade, a ceremony with great pomp and pageantry.

Certainly, William didn’t mean to draw his granny’s attention while on the balcony. Grandmas see everything, William. You should know that by now. And he possibly never thought his actions would make headline news. Not with something so seemingly insignificant as interacting with his son.

We wonder why the future monarch knelt down. Did little George ask a question? Was he afraid of something? It could be all manner of things. We’re certain though that William would take all the reprimands from his granny because he’s a great father to his children. And all he wants for them is to be happy.

Perhaps George was scared; William must have memories of standing on that same balcony as a child and being gazed upon by all those people below in the crowd. It must be very confusing for a small child to go through something like that. Plus, the flyby is quite noisy, which could also frighten the little ones.

Come for the queen scolding William, stay for the George facepalm. pic.twitter.com/etvmofiU5m