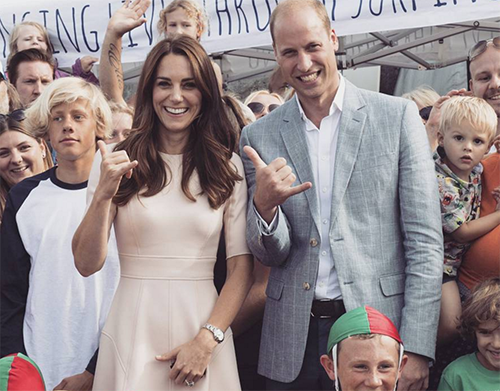 In fact, there’s a new report that says Prince William and Kate Middleton are even playing sides, as they too are so distraught over Brangelina’s divorce that it’s even causing some major friction in their own marriage. Back in 2015, Brad and Angelina reportedly had tea with the Duke and Duchess of Cambridge at Kensington Palace during a very well-publicized meeting. The two couples supposedly talked about combatting illegal wildlife trade.

According to OK! Magazine, Prince William wants to ban Brad Pitt from Kensington Palace, making Kate suspicious that he might be a little too pro-Angelina Jolie. A source close to the royal couple say that William is demanding they ‘cut off ties with Brad’ while constantly praising Angelina for her ‘incredible humanitarian work.’

On the other hand, Kate is wary that her husband’s Hollywood crush on the actress might be unnecessarily pushing Brad out of the picture. The insider added that Kate ‘can’t bring herself to believe Brad would ever hurt his kids intentionally.’

Of course, it wouldn’t be surprising if Brad Pitt and Angelina Jolie’s divorce really did cause the Duke and Duchess of Cambridge to fight over it. After all, both Prince William and Kate Middleton are completely obsessed with Hollywood and its celebrity culture, as they do have been desperate to get the same exposure that Brangelina have enjoyed for years.

The Duke and Duchess have long made it clear that they are not interested in day-to-day ‘royal’ work as they would rather wine and dine with the social elite wherever they go. In fact, Kate Middleton is so obsessed with her public image that she would rather have the spotlight above anything else, including her title in the monarchy. That’s why she’s so invested in Brad and Angelina’s divorce so much so that it’s causing problems of her own.

Tell us CDL readers, do you think Prince William and Kate Middleton are taking sides in Brangelina’s divorce? Does William indeed have a crush on Angelina? Should Kate be worried? What do you think?

On their final day of #royalvisitcanada The Duke and Duchess meet families supported through tough times at The Cridge Centre.

The Duke and Duchess visited UBC Okanagan earlier today to mark the campus’s 10th anniversary. Whilst they were there Their Royal Highnesses also watched a volleyball demonstration from the university’s women’s team. Thanks to UBC for the incredible welcome, and for The Duke and Duchess’s special jerseys! #RoyalVisitCanada 🇨🇦 Image © PA