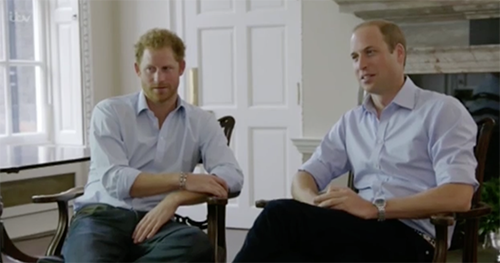 Brothers Prince William and Prince Harry were quite relaxed in a candid interview where they found themselves mocking their father, Prince Charles. During the interview, Prince William even let out a swear word! What word would that be? Bollocking.

What on earth does that mean, you ask? Great question. Let me enlighten you with the true definition: Bollocking is a word of Middle English origin, meaning “testicles.” The word is often used figuratively in British English and Hiberno-English as a noun to mean “nonsense,” an expletive following a minor accident or misfortune, or an adjective to mean “poor quality” or “useless.”

There you have it. For all of us here in the USA, it isn’t considered a curse word, but rather funny instead. Guess who else just got busted for using the same word on live television? Piers Morgan! He was talking about this very story on Good Morning Britain and was criticized for being offensive.

Now before you get your panties all in a bunch, check out the video and you will be laughing just as much as I was. It’s all in good fun. I think it makes the royal family seem a little more “normal” and down to earth when we get to see this lighter, carefree side to them.

The interview was held at Kensington Palace in a family sitting room where the guys were able to relax and be completely candid.

The royal brothers describe in the video days from the past when they attended Eton College and received handwritten letters from their father, Prince Charles. Apparently, he has really bad handwriting that only gets worse when he writes letters late at night, drifting off, creating “long As” that would run off the paper.

Seriously though, how sweet is that? Old school, handwritten letters from your parent while off at school. Clearly, Prince Charles isn’t too keen on modern technology. They even revealed that the notes Prince Charles sends to the Government Ministers are known as ‘black spider memos’ thanks to his bad handwriting. That is seriously hysterical! See, royals are real people too!

I have never been a fan of my own handwriting and I am very, very keen on modern technology. You would never want to read my stories if they were handwritten, trust me. Thank you to the Royal Family for keeping it real. Enjoy the video below!