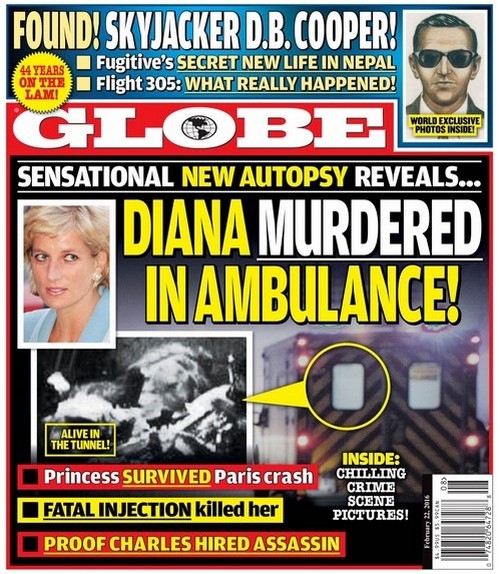 Princess Diana death conspiracy theories are nothing new. The latest tabloid allegation is that Prince Charles ordered MI5 spies to poison the Diana in the event the Paris tunnel car crash didn’t kill his ex-wife.

Prince Charles masterminding anything at all is preposterous. But purportedly the future King not only worked with a group of rogue MI5 agents and mapped out the car crash in Paris – there was backup plan to poison Princess Diana if she didn’t die on the scene.

We might believe Camilla Parker-Bowles could come up with two plans, but Prince Charles, on his own?

Let’s take a moment to recap the suppositions surrounding Princess Diana’s death. Back in 1997 Prince Charles was humiliated that Diana was romantically involved with Dodi Fayed. Then speculation that Princess Diana might be pregnant with Dodi’s baby started making the rounds in aristocratic circles. At that point, conspiracy theorists claim the Prince of Wales decided Princess Diana must die.

The story goes that highly skilled MI5 agents who had gone rogue met with Prince Charles and devised two murder plots. One was the fatal car crash in the Paris tunnel. The second was to poison Princess Diana in the event that Prince Charles’s former wife did not die at the scene of the crash.

This is how the poisoning was purportedly arranged. One of these agents posed as a member of the ambulance crew dispatched to the scene. After a doctor at the crash site revived Diana with “emergency resuscitation,” the poser put plan number two in action.

The phony paramedic allegedly would inject Princess Diana with some kind of lethal injection that stops the heart. Diana was still alive when she arrived by ambulance at the Pitié-Salpêtrière Hospital. Once at the hospital the lethal injection was covertly administered. Unless the coroner specifically tests for the drug during an autopsy it wouldn’t be found.

This substance was allegedly discovered during the new autopsy last year. Conspiracy buffs say this is proof positive Prince Charles conspired assassinate Princess Diana. If this is all true Prince Charles could be charged and tried for conspiracy and murder – but of course it is merely tabloid fodder, right?

Supposedly “incorruptible CSI experts and lawmen are tying up all the loose ends to build an airtight case against the Prince of Wales.” If Prince Charles were to be found guilty of plotting the Princess of Wales death there would be no need for Queen Elizabeth to worry about who will be the next King.

Wouldn’t a murder conviction for bumbling Prince Charles put Prince William and Kate Middleton in line to be the next King and Queen? After all, a man convicted of conspiracy and murder can’t be the Supreme Governor of the Church of England, and that ceremonial title comes along with being King – or Queen.