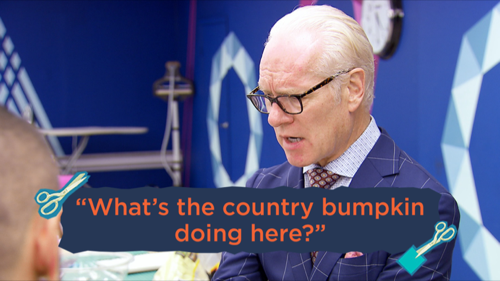 Tonight on Lifetime their Emmy Award nominated series Project Runway airs with an all-new Thursday, December 8, 2016, episode and we have your Project Runway recap below!  On tonight’s Project Runway season 15 episode 12 “An Unconventional Trip,” as per the Lifetime synopsis, “The designers take a trip to an unlikely destination in the twisting, turning final challenge, which determines which designers will compete at New York Fashion Week.”

Did you watch last week’s episode and want to get caught up before tonight? If you missed it we have a full and detailed recap, right here!

Tonight’s episode of Project Runway kicks off with the final five designers travelling to Austin, Texas. They check in to the Best Western, Tim Gunn and Nick Verrero are waiting for them. Tim Gunn announces that this week will be another unconventional challenge.

First, the designers head to a Farm & Supply store with a budget of $500. Laurence and Roberi find themselves in the leather aisle, buying horse harnesses. Meanwhile, Erin and Cornelius seem to be taking a bit stranger path. Erin is filling her cart with mealworms, and Cornelius buys a ton of different shaped dog treats.

Next, the designers hit up an Austin specialty shop, and stop at a local barbecue joint and have lunch with Tim Gunn.

The final five are flown back to New York with all of their goodies from Austin, they head straight to the work room and get started. This week they have 2 days to complete their challenge.

Cornelius realizes that he may be in over his head with the dog treats, and decides that they aren’t going to work. Now, he is back to square one and has no idea what he is doing.

Erin dumps out her meal worms on the floor and starts spray painting them gold, it looks like she is really using worms on her dress.

Roberi is making an entire dress out of weaved and knotted twine that he got from the farm and supply store.

Rik and Laurence seem to be making progress with their leather harnesses and collars and both of them already have dresses taking shapes on their mannequins.

It’s Day 2 of the challenge, the designers wake up bright and early and head back to the work room. Tim Gunn arrives and he has an announcement to make – he announces that there is another dimension to this challenge. Now, the judges want them to create a second high-end fashion look that corresponds with their first look.

They head to Mood to pick up fabrics for their second looks. Cornelius is full blown panicking, he hasn’t even figured out what he is doing for his first look yet.
After their trip to the fabric store, the designers are all wound up pretty tight, they weren’t prepared to have to create an additional dress.

6 hours in to the day, Tim Gunn returns to check in on them. He’s worried about Erin’s unconventional dress – her flowers made out of worms and guitar picks are a little complicated. Tim warns her that her dress can’t look like a smorgasbord with things stuck to it.

Rik gets a pretty tough critique from Tim Gunn. He warns Rik that his dress looks like a country bumpkin’s outfit and there is nothing high-fashion about it. Meanwhile, Tim freaks out when he realizes that Roberi hasn’t even started his second look and he is still tying knots in to a dress.

Somehow, Cornelius is pulling something together, he actually has more done than Roberi at this point. Before Tim Gunn leaves, he lectures the designers about getting moving and finishing their designs. After Tim leaves, Roberi is feeling pretty down about his designs.

Laurence gets back to work on her bird seed and napkin dress. It’s actually coming together really nicely and from a distance you can’t even tell that the bird seed isn’t glitter.

The models arrive for their fittings. Erin has switched up her unconventional look after Tim’s critique and it looks much better than her first version.

Roberi decided to put the rope dress aside and he finished his second design and it fits his model perfectly.

Laurence has always been the calm, cool, and collected one this season – but even she is starting to feel the pressure. After a long day of running around like chickens with their heads cut off, they head home to get some sleep.

The next morning, the designers have a few hours to add finishing touches to their dresses and to get their model’s hair and make-up done, prepping them for the runway.

Time is winding down quickly, it’s not long before Tim Gunn arrives and tells the designers and models that it is time to head down to the runway to walk for the judges.

Heidi Klum announces that the runway show is about to begin, this week the judges are joined by guest judge Priyanka Chopra, from Quantico. The designers take their seats, and the models begin marching down the runway in this week’s designs.

After the runway show, the designers get a chance to explain their dresses to the judges. Laurence is up first. Nina praises her harnesses and bird seed, she says that it has a “beautiful effect” and she announces that it is one of the best pieces in the show. Priyanka is amazed, she had no idea that the dress was made of bird seed. Zac jokes that the model looks like “Xena Warrior bird seed” but he is not a fan of her second dress. Heidi isn’t impressed, she says that Laurence’s dress is “baby poop colored.”

Rik’s dress is made out of dog leashes and vinyl records – Priyanka loves it and says she would actually wear it on the red carpet. Nina isn’t too impressed with Rik this week, she says that she couldn’t tell which one of his dresses was supposed to be unconventional.

Interestingly, Heidi Klum and the judges are huge fans of Roberi’s unconventional dress made out of knots. The other designers thought that Roberi was going to bomb, but so far he has gotten the best reviews. Nina agrees that Roberi’s dresses are impressive.

Zac Posen loves Erin’s meal worm dress. Heidi Klum is amazed that they were actually worms, Erin explains to her that they were already dead, they are actually chicken feed. Erin receives all positive reviews. However, Nina isn’t impressed with her conventional look – her second outfit was just a simple floral jumpsuit.

The judges seem to like Cornelius’s conventional jumpsuit more than his dress made out of plastic cups shaped in to flowers. It’s not the first time someone has cut up plastic cups and made flowers out of them on the show. Zac snarks that it’s too “arts and crafty.”

The judges dismiss the designers so they can discuss who will be going home and who will be moving on next week to NY Fashion Week.

The judges take a closer look at all of the dresses, and then they deliberate. After what seems like forever, Heidi Klum calls the final five back to the runway.

Heidi announces that this week’s winner is … Roberi, and he will be going to New York Fashion Week.
Erin, Laurence, and Rik are safe and moving on to the final four with Roberi.Cornelius is officially eliminated from Project Runway.