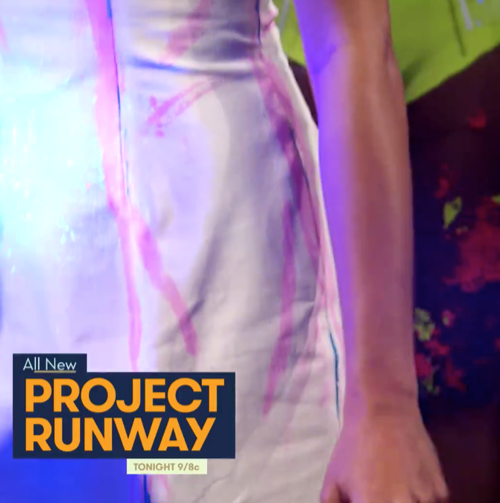 Tonight on Lifetime their Emmy Award nominated series Project Runway airs with an all-new Thursday, September 26, 2016, and we have your Project Runway recap below!  On tonight’s Project Runway season 15 episode 3 “Blacklight or Daylight?” the designers must design clothes that sparkle in the night or day!

Did you watch the last episode of Project Runway the designers met their clients the everyday women in NYC.  They were asked to create a look that benefits women of any shape, size, and age?  If you missed the episode we have a full and detailed Project Runway recap, right here.

On tonight’s Project Runway episode as per the Lifetime synopsis, “A black-light challenge tasks the clothiers to create looks that sparkle not only in daylight but also under black lights on the runway. The guest judge is Jaime King.”

Tonight’s episode of Project Runway kicks off with Tim Gunn and the designers. Tim and Heidi Klum shut off the lights and walk the black light runway. For this week’s challenge, the designers will have to create an outfit that looks good in daylight, and on the blacklight runway.

The designers are thrilled by the idea of working with blacklights and neon colors. Tonight’s special guest is Sherry Anne, a rep from Transition Lenses. Transition Lenses adapt to changing lights, just like the designer’s outfits are supposed to. The winner of tonight’s challenge will get an exclusive spread in Mary Claire Magazine.

The designers will have one day to complete this challenge, they get to work sketching. Rik is determined to make a dress that looks basic in the daylight and pops under the blacklight. Meanwhile, Mah-Jing is using her fiancé as an inspiration, apparently she likes to dress “funky.” Tim Gunn takes the designers to Mood to pick out their fabrics for this week. The designers bring along blacklight flashlights to test out the fabrics and see how they will look on the blacklight runway.

Once they get their fabrics from Mood, they head back to the sewing room to get to work. Mah-Jing is feeling a bit emotional because it is Father’s Day and he misses his daughter. He has never been apart from her this long. He slips away to video chat with her.

Tim Gunn arrives after a few hours to check on the designers. He is not impressed with what Kimber is working on. He says that the print she chose is ugly, Kimber agrees – she wants to tear it apart and start over.

Cornelius is working on a white dress, and he is spray painting shapes on it. Tim doesn’t seem too sure about it, he thinks that Cornelius should add more colors or shapes.

Dexter has a white blazer and is adding fringe. Tim Gunn thinks that Dexter should “go for it a little more” and he is way more talented to be presenting something so simple. Rik gets a similar critique.

Brik was nearly eliminated last week, you would think that he would be on his “A” game. But, it appears to be the opposite. Tim Gunn reminds him that he has been on the bottom for the last two challenges and he needs to step it up. Mah-Jing gets the worst critique of all – Tim tells him to scrap the dress that he designed for his fiancé and start over.

Jenni’s dress is a mess so far. The textiles that she closed are not coming together, and Tim tells her that the knit part of her dress is hideous. After Tim’s critiques, the designer’s models arrive to be fitted.

Putting together a dress is only half the battle this week, once they are done, the designers are spending hours hand-painting their outfits with glow in the dark paint to try and make them pop for when they shut down the lights on the runway.

Time is ticking down, the despigers rush around frantically putting on the finishing touches of their designs. It’s finally time for the big fashion show – the designers and judges take their seats and the models parade down the runway. The judges have no idea which outfit belongs to which designer and they are judging anonymously. Tonight’s guest judge is the very talented actress Jaime King.

After the runway show, Brik, Tasha, Nathalia, Sarah, Dexter, Roberi, Laurence, and Alex are all say – they head backstage. Kimber, Mah-Jing, Jenni, Cornelius, and Rik, and Erin are remaining on the stage. The judges are not impressed with Kimber’s design, they consider it underwhelming. Rik gets the worst critique – the judges are horrified by his design and Heidi says that his model looks like she is “about to twerk in a low budget music video.” Heidi also mocks Mah-Jings dress, she says that it looks like when forensics shines a black light on a mattress.

After careful consideration – Erin, Cornelius, and Jenni are safe. The judges announce that Erin is the winner this week. Mah-Jing, Kimber, and Rik are in the bottom three. Heidi announces that after the judges talked, they decided to eliminate Kimber from Project Runway – she is officially out of the competition and headed home.