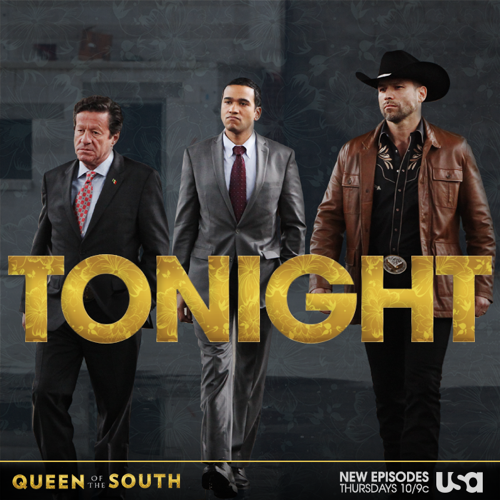 Did you watch last week’s episode where out of options, Teresa (Alice Braga) and Brenda (Justina Machado) found themselves in a desperate situation?  If you missed the episode we have a full and detailed Queen of The South recap, right here for you!

On tonight’s episode of Queen of The South as per the USA Network synopsis,“Teresa (Alice Braga), determined to escape and save Brenda (Justina Machado), risks her life to protect the book by any means necessary. Meanwhile, in his campaign for Governor, Epifanio (Joaquim de Almeida) obtains new intel that changes everything.

Epifanio Varga was not a man to mess with however Camila had gone out of her way to agitate her estranged husband because she had needed him to be distracted when she took over the business. But doing that ended up costing Camila. Camila’s daughter Isabela now hated her and believed that she was ruining their lives by wanting to be a part of the drug business. So Camila had been trying to repair her relationship with her daughter on tonight’s episode of “Queen of the South”. And unfortunately, she kept finding herself rebuffed.

Isabela had apparently hated her mother for one simple reason and that had been because Camila had left her. Camila had left her daughter and her husband to go run drugs in Texas. So there was nothing that Camila could say or do to get Isabela to forgive her for that. However, Isabela wasn’t being impartial because she was taking Epifanio’s side in this feud between her parents. Isabela appeared to have gotten closer to her father with her mother’s absence so she had come to trust her father and even believed him when he said he was turning his life around. And so that’s why Isabela wanted to be part of her father’s world and not her mother’s.

Yet, Epifanio wasn’t as clean cut as Isabela wanted to believe. Epifanio was still pursuing his governorship through underhanded means that he had picked up from his cartel days and it didn’t seem as if his cartel days were even over. Epifanio had later heard back from his men in the desert and he had been told that they found Teresa. So Epifanfio had his men take Teresa to his warehouse and there he gave her an ultimatum. He told her that she could tell him and his friends were Guero’s book was or he was going to hand her over to his men. With one of them being the same man that Teresa had once disfigured.

So technically that ultimatum had been option between dying slowly or enjoying a quick and merciful death. But Teresa didn’t like any of those options and sadly she didn’t have her Camila connection to fall back on so she tried to make the best of what she had. Teresa had tried to confuse Epifanio by playing mind games on him and leaving him scared. And surprisingly that didn’t work on him even as worked on his friends because Epifanio had known where Teresa picked that little ditty up. He said that she got them from his wife who was herself a master manipulator.

Though in spite of his grievances against his wife, Camila did at least grant him one favor. Camila had allowed and let Epifanio know that she allowed him to win the governorship. So once again Camila managed to distract at just the right time and Epifanio had been so consumed with getting revenge that he had let his underlings handled Teresa. And it turns out that his men had been no match for the woman that Teresa became while she was away.

So Teresa had been able to kill her Gato yet she had taken another man alive. Teresa had needed a ride to El Limpiador which was where Brenda was being held and so her hostage was supposed to be her cover in getting close enough to attack before anyone becomes the wiser. However, both Teresa and surprisingly her new friend had found out something on their way to El Limpiador that changed the way they saw each other. The two had found out that Epifanio was using the military to burn the whole drug trafficking business down rather than hand it over to his wife Camila to control.

Yet, what Epifanio was doing out spite was dangerous to pretty much everyone. Epifanio was apparently burning every bridge he’s ever had because he was targeting people that had still been loyal to him up to that point and his new tactics had made the others believe that maybe they should have abandoned him as well. So that’s how Teresa found out what Epifanio was doing. Her hostage had turned against him and was willing to align himself with Teresa because he wanted to warn his friends at El Limpiador. And possibly save them from the military.

Teresa on the other hand, had started to think a little bigger since finding out what Epifanio was doing. So she had called Camila from the car and had asked Camila to meet her at El Limpiador because she had the one thing that could destroy Epifanio. She told Camila that she had a book that could unravel shine a light on everything that Epifanio did to get where he was and that the book could also take Camila down with Epifanio. Though Camila had been hesitant to believe Teresa’s claims because she had already been burned by Camilla before.

James though convinced Camila that they could trust Teresa. He said that if Teresa said the book was real then the book was real. So the two chose to drive out to El Limpiador instead of getting out of the country liked they planned and they had also left Isabela behind back at the house. Isabela it seems had told her mother that she wanted to be with her father so she had threatened Camila. The teenager had told her mom that she would runaway if Camila forced her to go to Dallas and that she would always her mother for forcing to her to go.

But while Isabela finally got what she wanted which was to be left alone, Teresa had ultimately found out that she had been too late to save Brenda. Brenda had been dead by time Teresa had gotten back to El Limpiador and Teresa had unfortunately unraveled after that because that’s when she began killing people without discretion. So finding Brenda like that had turned Teresa into the kind of person she hated and yet she didn’t want to give up on power now that she had her first taste of it.

So when Camila arrived for her meeting, Teresa told her that she would be making the terms from now on and that Camila was just going to have to accept that. Yet Teresa still had a long way to go to running her own cartel and having Guero still alive out there was bound to hurt her in the end. Especially as Guero was now working with the DEA.