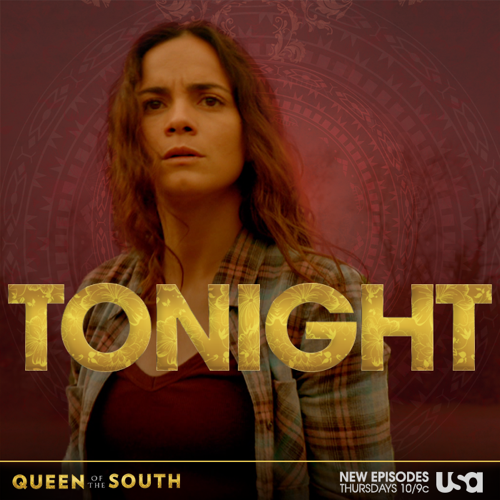 Tonight on the USA Network Queen Of The South airs with an all-new Thursday, September 8 episode and we have your Queen of The South recap below.  On tonight’s Queen Of The South Season 1 Episode 12 Episode, Teresa (Alice Braga) and Brenda (Justina Machado) risk everything with an extortion attempt; and Camila goes further in her effort to overtake Epifanio’s empire.

Did you watch last week’s episode whereTeresa (Alice Braga) tried to save a witness to the  heist?  If you missed the episode we have a full and detailed Queen of The South recap, right here for you!

On tonight’s episode of Queen of The South as per the USA Network synopsis, “Out of options, Teresa (Alice Braga) and Brenda (Justina Machado) find themselves in a desperate situation, playing a dangerous extortion game.”

Teresa and Brenda were a little indecisive about what to do with Guerrero’s book. Teresa had wanted to follow the coordinates that were in the book to see where they lend however Brenda felt that maybe they should cut their losses and just hand over the book to the DEA. So the ladies weren’t agreeing about what to do next and apparently they were both scared about what would happen if they ever got caught with the book to begin with. But Teresa didn’t want to turn back once they got started and she felt the coordinates were going to be important.

So Teresa had ridden over any and all objections that Brenda might have and she chose to keep driving to the location from the book. However, Teresa’s friends were probably digging themselves deeper into trouble with this deal that Camila made with the Jimenez Cartel when Teresa was off in the desert. Camila had wanted to be on friendlier terms with Manuel of the Jimenez Cartel because she needed his support to make a move against her husband. And unfortunately the deal she made with Manuel was putting at her odds with both the DEA and James.

James hadn’t wanted to go to war with the DEA though he didn’t want to betray Camila so he ended up doing as she asked of him in the end. James had kidnapped a DEA Agent’s husband and he had tortured the man in hopes that he would reveal where his wife was thereby telling James her location. Yet, the poor woman’s husband loved her so much that he died trying to protect her. So James was forced to come up with a second plan and he chose to steal the dead man’s phone to see if he could get the wife to answer her husband’s text messages.

The woman thought her husband was texting her because he misses her. So she continued a conversation with him despite being in charge of a high profiled prisoner that was being moved. Though sadly for that agent, James and thereby Camila wanted that prisoner. The prisoner was a high ranking lieutenants in the Jimenez Cartel and Camila was supposed to hand that man over to cement the alliance she had made with Manuel. And so Camila really shouldn’t have made a move against Epifanio until after she had fulfilled that deal, but she couldn’t help herself.

Camilla had preemptively lashed out at her husband and she had created quite a stir. So much so that Cesar had called her and had asked to set up a meeting. Cesar had apparently wanted to warn Camila in person that she shouldn’t be upsetting Epifanio so close to the election. But Camila had told him that she wasn’t worried. She had told him that she had made a deal with Manuel and more importantly that she didn’t need to worry about what Epifanio would do to Isabela because her actions.

Camila had had Isabela picked up from school and the teenager had been brought to her secret location. So in one fell swoop Camila removed whatever leverage Epifanio may have had over her. However, the only option that was left to him now was to kill her. Camila’s actions which were to cause an unrest of gang violence in the city on the eve of the election was making people lose faith in Epifanio. Particularly as Epifanio was being linked to what happened in the city with all the violence.

So the only thing that was protecting Camila was her alliance with the Jimenez. Yet, while many people were already jumping ship when it came to Epifanio, there were still a few people that were loyal to him and didn’t necessarily run over to Camila’s side like Cesar ended up doing. Epifanio it seems had a man in Mexico whose job was to basically watch over the mass grave he had out in the desert. And so when that foot soldier saw Brenda and Teresa nearby, he had taken both women hostage and had tried to extract information out of them the hard way.

Teresa, though, hadn’t been frightened. She had known what to say and just how to say it to get the henchman to back down. Teresa had threatened Epifanio’s men that she had friends who knew where she was and who would publish the book with the coordinates to the mass grave if anything happened to either her or Brenda. So Teresa and Brenda were able to walk out of that situation with both of their lives however Teresa had also made sure that they had gotten paid before they left so Guero’s book did at least fill their bank accounts.

Though before they could truly escape, Brenda made a mistake. Brenda told the guys not to go looking for her cousin who had the book because her cousin was watching her son. So that had told the Epifanio’s men that she had a son who could also be used against her and so they wanted their money back. Even if they had to take by force. And so they caught up with Brenda while Teresa had tried fleeing away in one of their cars, but they ended up sending her over the side of the road and it was unclear what was going to happen to her next.

Camila however, had done what she set out to do and luckily James had been able to fulfill her end of the agreement. But taking over from Epifanio had cost her something in the end and that had been her daughter Isabel. Isabel had been proud of Epifanio for turning his back on their old lifestyle and wanting to become a governor. So she had hated what her mother did because she felt Camila dragged her back into the life just as she was becoming someone respectable and that her mother didn’t even do it for her. Camila had done that because she hated Epifanio more than she loved her.

So when this war between Camila and Epifanio heats up, it doesn’t look as if Isabela was going to be on her mother’s side.