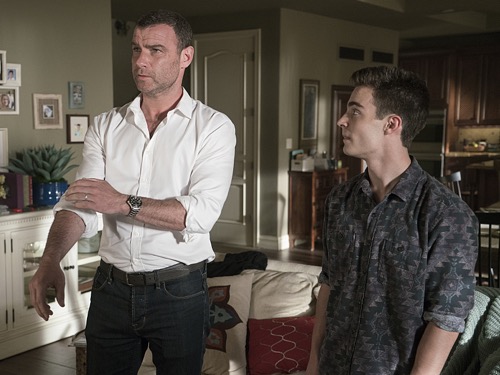 Tonight on Showtime the highly entertaining show Ray Donovan returns with an all new Sunday August 14, season 4 episode 8 called “The Texan” and we have your weekly Ray Donovan recap below. On tonight’s episode, Ray [Liev Schreiber] enlists Lena [Katherine Moening] and Daryll. [Pooch Hall] If you cannot wait for tonight’s episode, we already spoiled the episode for you, CHECK IT OUT HERE!

On tonight’s episode as per the Showtime synopsis, “yay enlists Lena and Daryll to ensure the rematch with Whittaker proceeds.”

Tonight’s episode of Ray Donovan kicks off with Ray Donovan at the hospital – he heads to Ed Cochran’s room with a duffle bag. He drops the bag off with Ed, and then he spots the Texan’s daughter in the waiting room. He’s in the ICU. Ray stops by the Texan’s room, he’s in bad shape.

Ray asks him how he started working with Ezra. He explains that he came back from Vietnam and was working as a stunt man, he met him in the 70’s. The Texan scoffs that Ezra protected Ray from the “really dark shit,” that was always his territory. The Texan introduces his daughter Julia to Ray. He tells Ray that she has no idea what he does – and he wants to keep it that way.

Next Ray heads to the prison to pick up Mickey – he is a free man. Apparently, Ray and Ed Cochran’s plan all worked out, the DA took their trade. Ray tells Mickey that he doesn’t owe him anything and takes him out to breakfast. Mickey tells him all about his adventures in the gay wing at the prison. Ray tries to give Mickey some money to get back on his feet, but he won’t accept it.

Ray heads home and finds Connor in the living room playing “Just Dance” and bopping around like a clown. Ally finds Ray and Connor dancing together. Ray brags that he is “smoking Connor like a Cuban cigar.”

A knock at the door interrupts their dance party – it’s their neighbor Larry. He tells Ray all about Connor shooting the gun off in the middle of the street. Ray chases Connor upstairs and roughs him up a bit – he finds the gun hidden in Connor’s mattress. He orders Connor to put his shoes on and get in the car.

Mickey shows up at the gym, he wants to borrow Bunch’s car so that he can drive to Primm and take care of “unfinished business.” Bunch is upset – he just got work that Theresa’s family put her in a mental hospital. Mickey gives Bunch a pep talk and convinces him to go visit Theresa in Bakersfield.

Hector is training at the gym and someone turns on the TV. He is shocked to see his sister Marisol doing a live interview. She announces that she and her brother are having sex with each other on live television. Hector is furious – he runs out of the gym.

Ray drives Connor to the shady side of town. He hands him a folder full of kids his age that were shot with guns. He’s disgusted by the graphic photos. Ray kicks him out of the car with the gun and drives off. Connor is shaking, finally Ray lets him back in the car, it looks like his Dad might have gotten his point across.

Bunch heads to the mental hospital to visit Theresa. Ray waits in the waiting room and makes friends with the other patients. In her room, Theresa doesn’t even acknowledge Bunch. He sits on her bed and tries to talk to her and she stares off in to space. Bunch begs Theresa to come back with him, but she says “no” and rolls over.

Terry calls Ray and tells him he needs to get to the gym, Hector is losing it. Ray arrives and Hector is in the bathroom crying, Hector announces that “it’s over.” Ray announces that he isn’t going down with Hector’s sinking ship. Terry begs Ray to help Hector get his fight back, he got dropped because he violated his morality clause. Terry tells Ray that if he helps get Hector his fight back, then he will be helping Terry too, and the gym.

At the mental hospital, Bunch wants to leave. He explains to Mickey that Theresa isn’t even there. It was like talking to a stranger. He is scared that Theresa will never get better. Mickey doesn’t think Bunch should leave her there, he says it’s the drugs that are making her act like that.

In the car on the way home, Connor and Abby fight. He shouts at his mom that he is sick of his father being a Hollywood legend, and everyone treating him like he is “just a little prick in Calabasas.” Abby feels for him, she takes him to the shooting range and they talk. Connor confesses that he was shooting the gun because he was drunk and trying to impress Damon. Abby decides to come clean to Connor while they are sharing – and she confesses that she has cancer. She reassures him that she isn’t going to die though.

Meanwhile, back at the gym, Terry and Hector are getting drunk together. Hector can barely string sentences together. He and Terry take their shirts off and show their tattoos to each other. Terry tells Hector all about his wife, then they decide to get in the ring and try to fight each other.

Mickey is definitely not a good influence on Bunch. He encourages Bunch to go to Theresa’s brother Marco’s house and get some stuff to try and remind her of who she is. While he is there, Marco reveals that this is actually the fifth time that she has been in the mental hospital and she has been burning herself and threatening to slit her wrists her whole life. He heads back to the hospital and gives Theresa a moving speech about the first time he saw her at the fight club. Then he and Mickey break Theresa out of the hospital and hit the road and head to Nevada so that now Mickey can get his girl.

Ray meets up with Randall and shows him a recording he got from his golf trip with Stu, in the video Randall is talking about how much he “hates Spics.” Ray uses it as leverage to convince him to give Hector the fight back. Meanwhile, Ray has Daryll taking out the replacement fighter that was supposed to go on in Hector’s place. He heads back to the gym and tells Hector his fight is back on – on one condition – he needs to make Terry one of his official ringside trainers.

Tonight’s episode ends with Hector keeping his promise to the Texan. He heads back to Ezra’s house and goes through the safe and cleans out all of the hold files so his daughter never knew what he really did. Ray heads back to the hospital, but the Texan is dead. His daughter Julia is upset – she knows her dad wasn’t really an insurance salesman and neither is Ray. Ray tells Julia that everything her father did was for her…

Ray heads home and has a heart to heart with Connor. He apologizes and admits he may have went a bit overboard, he just doesn’t want Connor to make the same mistakes that he made when he was a kid. Ray and Abby don’t want their kids to grow up to be like them..