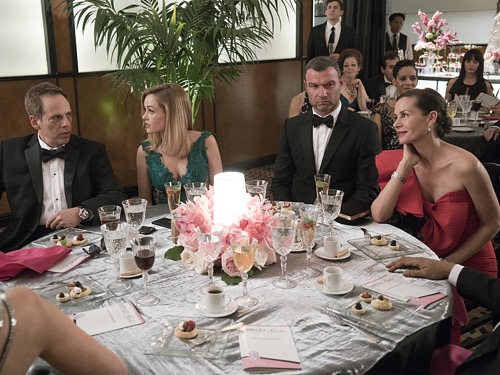 Ray heads to Sophia’s art gallery to break the news. “My father’s in County, we’re done now,” Ray tells Sophia. “We’re done, but Mr. Belikov has his ways.” Apparently, Mickey sacrificing himself isn’t going to help Ray or the Donovan family – everyone is still in danger.

After Mickey is processed at County he will be walked past Ivan Belikov’s [Pash Lychnikoff] cell. Because the authorities have no longer have any reason to hold Belikov for the murders that Mickey has confessed to Belikov will be released. ‘Ray Donovan’ spoilers indicate that even though Belikov is no longer imprisoned Mickey’s life will be threatened.

Forget the promise Ray made to Abby during the first episode of season 4 – nothing will get better, it will only get worse. Belikov is enraged that Ray has wasted his time – Ray will now carry out Belikov’s orders just as Ray did for Ivan’s son.

Ray Donovan spoilers for season 4 episode 6 reveal that in the wake of being abandoned by Teresa [Alyssa Diaz] Bunchy is lost and Abby will try to comfort him. Despite his own grief Bunchy knows something is wrong with Ray.

Ray and Abby will become Maria’s godparents at the baby’s christening. The priest will ask Ray, “Do you believe in God the Father, creator of Heaven and Earth?” The priest will also ask Ray if he renounces Satan and all his works. Ray will answer “I do” to both questions.

It does not appear that Ray will find the redemption he so desperately sought at the beginning of season 4. As Abby faces a double mastectomy, Bridget struggles to find herself and Conor may be following in Ray’s footsteps, the family is at a crossroads. Can Ray provide the protection and support the Donovan family needs in order to survive?