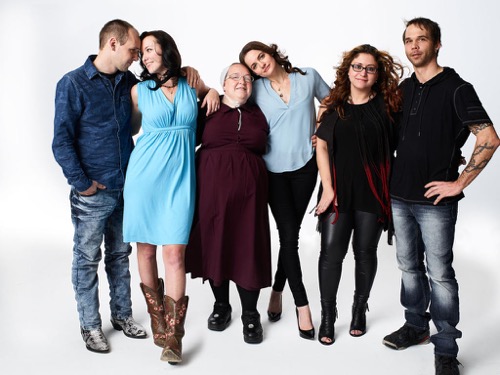 Tonight on TLC Return to Amish, the Breaking Amish spin-off airs with an all new Sunday, August 28 season 3 finale called “License to Wed,” and we have your weekly Return to Amish recap below. On tonight’s episode, Kate has a lot to prove at Fashion Week in Los Angeles.

On the last episode, Kate went to Los Angeles for a chance to make a name for herself at Fashion Week; Mary mulled her fate in Pennsylvania. Did you watch the last episode? If you missed it, we have a full and detailed Return to Amish recap right here for you.

On tonight’s episode as per the TLC synopsis, “Kate has a lot to prove at Fashion Week in Los Angeles; the cast go to Jeremiah’s wedding; Mary comes to a decision about her future.”

Mary came to a decision about her future on tonight’s episode of “Return to Amish” and it was a surprising one.

Mary had decided that she was apparently going to be moving back to Punxsutawney, Pennsylvania where the rest of her family was. Mary explained to the “kids” in Lancaster that she missed her husband Chester and that she had already spoken about certain things with him. Like how she’ll be treated in the community for instance. So Chester had assured her that the Amish community wasn’t going to be so bad to be around. However, Rebecca later admitted in her confessional that she had a feeling about her mother-in-law because she thinks Mary wants to believe that the Amish would accept her though she suspected that Mary knew deep down that the church was never going to take her back.

Though a lot of the “kids” were thinking that the move wasn’t going to be easy. Jeremiah felt that the Amish community wasn’t going to be accepting of Mary however, he chose not to say anything to her about it that could affect her decision because he respected what was ultimate her decision. So it would have been nice if Sabrina had been able to feel the same way about the choice that Jeremiah himself had made. Like proposing to his girlfriend of littles less than a year. Which he had also been very excited about until Sabrina began to drip poison in his ear by implying that he was rushing into things and that maybe he hadn’t thought everything through completely.

Sabrina though had an agenda. Sabrina had been one of the few people that hadn’t been excited or even happy about Jeremiah getting married. So it wasn’t a shocker that she kept saying these little spiteful things around him. But there was such a thing called crossing the line because it was one thing to say snide comments to Jeremiah and quite another to throw them at his fiancée. Especially when she’s gone out of her way to be as inclusive as possible with Jeremiah’s friends by inviting them to her dress fitting. And all she or any other bride really wanted to hear at such things was that she looked great in her dress.

So Carmela had done something nice because she didn’t have to invite Sabrina or anyone else for that matter to her dress fitting. Yet, Sabrina who should have been relieved that Carmela wasn’t threatened by her and Jeremiah’s past had actually tried to upset the other woman. Carmela had asked them about what should she do when she was arguing with Jeremiah and Sabrina hadn’t exactly offered any friendly advice although she had told Carmela that it was good thing that she wasn’t building castles in the sky or believing she was going to have a happily ever after. And so Sabrina had thrown a damper on what could have been an opportunity to joke about Jeremiah’s temper.

Although, the reason Sabrina had said that to Carmela was because she was remembering why she and Jeremiah couldn’t make it work. Which Sabrina apparently blamed on her own temper. So it’s not surprising that she wanted to ruin Carmela’s moment. Sabrina was simply jealous of the other woman and she very clearly wanted Carmela to have a problem with her still being around much less a treasured friend of Jeremiah’s. And so it was pretty funny in the end that Sabrina wasn’t the only one ruining Carmela’s introduction into the group because Jeremiah was just as bad as she was.

Jeremiah had surprisingly taken a step backwards when he had insulted Rebecca seemingly out of nowhere. But leave it to Jeremiah to suddenly insult Rebecca while she was in the middle of bonding with Carmela. So Jeremiah had done his fair share of ruining Carmela’s introductions however no one ended up taking personally because it was Jeremiah. And so the ladies had tried ignoring him in order to focus on the wedding day.

Only Jeremiah had more than one incident in the lead-up to the wedding. Jeremiah it seems had wanted to have Kate at the wedding because he still considers her to be family. However, Kate had refused to answer any of his calls. Kate had probably remembered the last time she saw Jeremiah and how he had insulted her by saying that she doesn’t care about anyone but herself. Plus he had also accused her of being a fake friend everyone and that was shunning them because she was ashamed of where she came from. And so Jeremiah who rarely appeared to care about anyone else’s feelings had a problem with Kate not wanting to be at his wedding.

He felt that she should be there and support him yet he was rarely supportive of her and New York was possible the best example of that. Jeremiah had stayed with Kate in her small apartment for weeks. Though he loved to imply things about her when she wasn’t around and he said that she didn’t want to spend time with them despite the trip being last minute and Kate having both an internship and school. So really Kate had plenty of reasons for not wanting to be at Jeremiah’s wedding yet most of her friends had gotten upset with her for not wanting to be there. Mary and Abe felt like Kate was making a lot of excuses not to attend and they were beginning to believe that Jeremiah was right when he said that Kate was ashamed of them.

So the only person that didn’t sound off on that one and begin to think Jeremiah had been right about Kate was Sabrina. Sabrina didn’t blame Kate for not being there and to her it didn’t matter that Kate’s excuse had admittedly been weak. She chose to believe that Kate would come if she could so she wanted Jeremiah to back off. Yet if it wasn’t Kate upsetting him then it was his own fiancée. Jeremiah had later gotten upset with Carmela because their wedding license had disappeared after she had cleaned up. And what should have been a small problem had turned into this huge mess after he shouted her like a mad man.

Jeremiah had apparently blamed her for the missing wedding license and he hadn’t liked it that she had left the house to get her hair done with the license still missing. So he had called her and shouted through the phone that she needed to come back in order to fix everything. But Carmela had started to get teary-eyed after he yelled at her and she could have also been a little embarrassed that the other women at the hairdresser’s had overheard the way Jeremiah spoke to her. Which was widely disrespectful! And yet she didn’t give in when Jeremiah went off like that.

Carmela could have easily have shouted back at him yet she didn’t. Instead, she had remained calm through everything and Rebecca had a great amount of respect for her for being able to that. So Rebecca had called Jeremiah after she had overheard their conversation and she had tried to tell Jeremiah that he had been in the wrong to yell at Carmela like that. Especially as his fiancée was getting her hair done at the time in order to look good on their wedding day. Though Jeremiah had hung up on Rebecca because he hadn’t wanted to hear that he had overreacted. And therefore it had been up to Abe to set Jeremiah straight.

Abe had talked to Jeremiah and he had understandingly said that planning weddings were tough. However, he reminded the other man that he does care about Carmela and wants to marry her. So Jeremiah eventually called Carmela back and had told her that he still loved her despite all the garbage he said. And luckily for him, she quickly forgave him. Carmela had after all, said that one of the things she loves about Jeremiah was the way he understood her and by riding through the many ups and downs of his temperament – she showed that she understands him too.

Carmela had grown up in a restrictive environment as well because she had been in cult when she was younger and Carmela was also a mother. She had had her kids young too and she was about to become a grandmother. So Carmela was revealed to be pretty grounded for someone like Jeremiah. He usually went for the flashier girls that he didn’t really care to keep around and who caused more problems than they worth. Yet, Carmela was surprisingly good for him and Sabrina had been in tears when she realized that. Sabrina had seen how good of a person Carmela was and had actually congratulated Abe after the wedding was over.

And so Jeremiah’s wedding had left pretty much everyone in a great mood. But in the months afterwards, Kate still hasn’t spoken to Jeremiah, the Amish church was still banishing Mary in Punxy, and Esther ran away to be official leave the Amish church. So the kids we once all used to know where still going through some tough times though the one thing I would to know is who’s the father of Sabrina’s new baby.