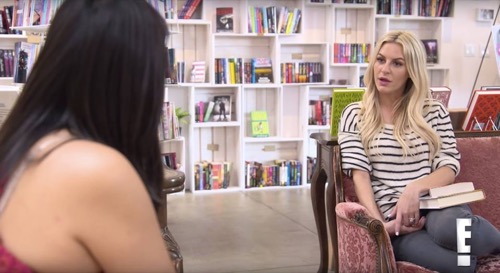 Tonight on E! Rich Kids of Beverly Hills continues with an all new May 29, season 4 episode 5 called, “#SkeletonsInTheCloset”.  On tonight’s episode, Morgan Stewart’s career interferes with her wedding planning duties when she is granted the opportunity to meet with a bestselling author in New York City.

On the last episode, Morgan and Brendan learned that their wedding date may be doomed; EJ decided to create his own business empire while also giving back to the LGBT community. Did you watch the last episode? If you missed it, we have a full and detailed recap right here for you.

On tonight’s as per the E! synopsis “Morgan’s career interferes with her wedding planning duties when she is granted the opportunity to meet with a bestselling author in New York City. Back in Los Angeles, EJ throws a glitzy launch party for his signature nail polish shade, while Brendan worries that the stories Morgan is writing in her book might be too scandalous.”

On this weeks episode of Rich Kids of Beverly Hills-Morgan and Brendan continue their wedding planning by going to Sanoma to look for cookware for their house. Morgan’s mom is with them and she asks them how Vegas was. Morgan tells her “It was crazy and we got a little too drunk and almost eloped. Morgan’s mom gets really upset.

Dorothy and EJ are going over her collection of Birkin bags. The dealer asks them to step into another room while he assesses the bags and comes up with a price. When they step out EJ asks Dorothy if she has heard from Bianca since Vegas. Dorothy tells him “No.” EJ tells her “The way she behaved at the party was completely outrageous.”

Johnny contacts Bianca and she thanks him for the black roses and alcohol he had sent to her. Johnny invites her to his house for dinner. While they are sitting down eating chips, Guacamole and beer Johnny talks to Bianca about her behavior at Dorothy’s birthday party in Vegas. First, he asks her if she has talked to Dorothy. Bianca tells him “No, and I have no intentions of doing so.” Johnny tells her “Your behavior was over the top.” Bianca responds by saying “Dorothy was just jealous and then she comes to my room at 1 in the morning with a drink telling me that she wants me to come down after all of the red carpet stuff is done is just ridiculous.” Johnny invites her to his DJ show in New York.

Morgan meets with her publicist and she asks Morgan what her plans are. Morgan tells her “I am going to New York to try on my wedding dress.” Her publicist tells her “While you’re there I have arranged for you to meet with Jennifer Weiner to discuss your book.” Morgan is very excited. Later that day Morgan and Dorothy go to a romantic bookstore and look around.

The next day Dorothy and Jonny go to the grocery store to gather ingredients to make Chinese dumplings. While they are there Jonny invites Dorothy to his New York show. She tells him “I would love to come. Who else is going to be there?” Jonny tells her “I invited everyone including Bianca.” Dorothy looks a bit disgusted. Jonny asks her “What is your relationship with Bianca right now?” Dorothy says “I don’t know. I reached out to her but haven’t heard anything back from her. I have done all I can.”

Brendan, his mom, and his best friend are all out at a cake tasting. After the baker leaves he talks to them about Morgan’s book and when he tells them the title is Boobs, Lubes and Blow Jobs they seem a little shocked. Brendan’s mom asks him “What kind of book is it going to be?” He tells her “I think it is her memoirs.” His best friend asks him “How do you feel about the title?” Brendan just kind of shrugs. His friend asks if he is worried that the book will be too intimate. Brendan tells him “It’s her story.”

Drew and EJ are hanging out at EJ’s house EJ tells him “My launch party is coming up next week.” Drew asks him “Are all of the New Yorkers coming in?” EJ says “Not all of them.” Just then Kyle calls and confirms that he will be at the party.

Jonny and Morgan are talking about his event. Jonny says “I invited all of my friends and if they can’t get along it’s not my problem. I am there to play music and they are there to support me.” Jonny tells Morgan “Bianca flew back to LA on Southwest. She said she’d rather fly commercial than to fly on private plane with Bianca.” Morgan says “That’s being really aggressive especially considering how Bianca acted at Dorothy’s party.” Jonny asks Morgan if she has talked to Bianca. Morgan tells him “I don’t have her number.”

Morgan and Bianca are talking. Bianca tells her “I felt attacked. Jonny had a moment with me and that led to Dorothy attacking me.” Morgan tells her “I know that you cried and were really emotional, but at the end of the day you were way more aggressive to her than she was to you.” Bianca says “I don’t trust Morgan. She is really good at manipulating Dorothy not to like me.” Morgan says “After our conversation in the green room Bianca and I went our separate ways.”

EJ’s release party is the day after Jonny’s event. EJ asks Morgan “How was New York?” Morgan says “It was great. I literally just got off the plane.” Dorothy is also there for the event. Everyone loves EJ’s nail polish and the event is a huge success.