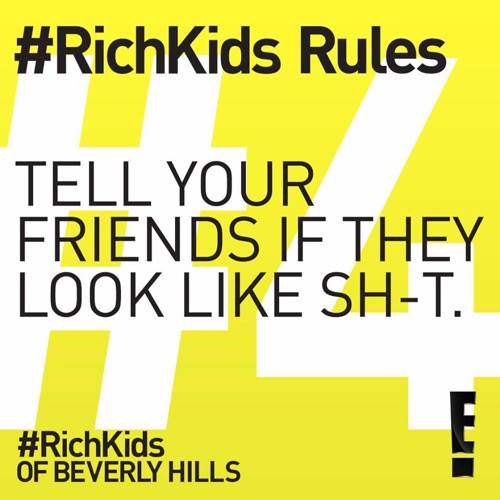 Tonight on E! Rich Kids of Beverly Hills continues with an all new June 19, season 4 episode 8 called, “#RunawayBride”.  On tonight’s episode In the Season 4 finale, Morgan Stewart and Brendan Fitzpatrick get into a fight as the threat of rain hangs over their wedding day. Wondering whether she’s ready for married life, the bride-to-be travels to NYC with EJ just days before the big event.

On the last episode, Dorothy had second thoughts about being a bridesmaid for Morgan after hearing what Morgan allegedly said about her. Did you watch the last episode? If you missed it, we have a full and detailed recap right here for you.

On tonight’s as per the E! synopsis “in the Season 4 finale, Morgan and Brendan get into a fight as the threat of rain hangs over their wedding day. Wondering whether she’s ready for married life, the bride-to-be travels to NYC with EJ just days before the big event. Meanwhile, Dorothy and Bianca’s relationship troubles come to a head at Jonny’s birthday.”

This week on Rich Kids of Beverly Hills Jonny and Dorothy are hanging out. Dorothy reveals that she and Quincy have been talking and working toward becoming friends. Dorothy tells Jonny about the confrontation between Morgan and Bianca in Miami. Dorothy tells him “I don’t know if I can be in Morgan’s wedding. I also think Bianca is trying to stir things up between me and Morgan. She was really upset that I didn’t have a stronger reaction to what Morgan says.” Jonny tells her “I think you should really think hard about Morgan’s wedding. You don’t want to miss a big moment in her and Brendan’s life.”

Morgan is at her bridal shower. She is missing Dorothy and wishes she was there. Morgan is talking with her mom and she tells her about the incident between her and Dorothy. Her mom says “We have always told you that you need to watch your mouth and this is your first adult lesson.” Morgan understands and her mom tells her “I hope you can work things out.”

Dorothy goes to visit Laura Baron to try to work out her issues. Laura tells her “Bianca tries to rile things up and keep things going.” Laura asks her “Why do you think Bianca tries to interfere with your relationship with Morgan?” Dorothy continues talking and she says “Bianca is trying to meddle in my relationship with Morgan. ” Laura tells her “Bianca has no right inside your friendship with Morgan. ” Dorothy tells her “I need to change how I am treated inside friendships.” Laura commends her. She tells her “You need to find your voice and become empowered and then people will treat you better.”

Brendan and Morgan are having issues with their wedding. Brendan is worried about the tent and the fact that the weather forecast calls for rain. Brendan tells her “We need the tent now to cover people. The sides are clear so that you can still see the atmosphere.” Morgan is not happy about this at all. She is really upset about the fact that she wanted to be married outside and because of the weather she won’t get exactly what she wants.

Dorothy and Morgan meet for dinner. Morgan tells her “Thank you for meeting me. You not being at my bridal shower was a really big void.” Morgan then goes on to apologize for what she said about Dorothy. Dorothy tells her ” You make people the butt of your jokes and it isn’t funny because you can really hurt people. ” She also tells Morgan “I want you to be held accountable for your actions. I don’t think you are a mean and malicious person at all.” Morgan tells her “I want us to be friends and I want you to be in my wedding. ” Dorothy tells her “I want to be in your wedding and be your friend, I just don’t know how.” The two toast to “their wedding”.

Morgan and EJ are lingerie shopping together. Morgan says “I am having a full melt down now. I feel like Brendan and I are suffering because of it.” Morgan says “I find little notes around the house about how I don’t appreciate him..” EJ tells her “I think you need to get away and come to New York with me,” Morgan says “I think you’re right. I’m having anxiety about everything a week before my wedding.” It is decided that Morgan will go with EJ to New York to take some time for herself.

When Morgan gets home she tells Brendan that she is going to New York the week before their wedding for a few days. He is not happy. He tells her “Do you remember how mad you got when I went away three weeks before the wedding?” Morgan says “Yes.” Brendan responds “Now you want to go away a few days before we are getting married?

Dorothy is out with Jonny for his birthday. Jonny asks her “What is going on with you and Morgan? Have you worked things out?” Dorothy says “What Morgan said about me was completely wrong, but Bianca needs to understand that she has no right to choose who my friends are.” Dorothy walks over and asks “What are you guys talking about?” They tell her “We are talking about Brendan.” Dorothy tells her “After the way you came after his fiancé there is no coming back.” Dorothy decides to address the situation with her and Morgan. Dorothy tells her “You told me what Morgan said to purposely start a war between me and Morgan and deflect from my issues with you.” Bianca says “I did not. Do you really want to be friends with someone who feels that way about your entire race?” Dorothy tells her “Morgan is not a malicious person. You told me what she said to purposely hurt me.” The argument rages on for a few minutes until Bianca says “I’m not doing this anymore.” Then she walks away from Dorothy.

EJ and Morgan are in New York hanging out with EJ’s friends. Morgan tells the group “I am getting married in one week.” EJ tells her “I don’t think we should talk about the wedding tonight. Tonight is just about doing you.”

Dorothy is hanging out with Quincy again. She asks him how his knee is doing and he tells her “It is doing better.” Dorothy asks him “Will you play next season?” He tells her “I will definitely play again next season. The two enjoy hanging out and Dorothy says “I think we will be in each other’s lives in some capacity, but right now it is just not romantic.”

EJ and Morgan are having a great time in the club. Morgan says “I’m having a blast with EJ, but all I can think about is Brendan and what he’s doing at home. I can’t wait to get home and be with the man I love and get married.” She tells EJ “I have had so much fun, but I am ready to leave the single life behind and go home and get married. I am leaving the single life to you.” EJ laughs.

On the day of the wedding Brendan is taking a helicopter ride to the venue. He says “I’m nervous and excited. I haven’t slept at all. I have been awake this whole time.” Meanwhile Morgan and Dorothy are hanging out. Dorothy says “Last week I wasn’t even sure I would be here. That just goes to show the strength of our friendship.” Back in the bridal room preparations continue as Morgan gets ready to walk down the aisle. Morgan’s mom says “The moment I am looking forward to is when Morgan’s father walks her down the aisle.” Morgan is so excited as she shares a glass of champagne with her bridesmaids. She is especially happy that Dorothy is there.

Meanwhile Brendan is extremely nervous. He says “I’m just ready to see Morgan at this point.” As the ceremony begins Brendan makes his way down the aisle. Once he takes his place the minister asks everyone to rise. The bridal march begins to play and Morgan and her dad make their way down the aisle. Brendan says “This is the moment I have been waiting for and all of my butterflies have gone away.” The ceremony goes on and Morgan and Brendan take their vows; promising to love and respect each other. They both cry as they read their vows and exchange rings. Everyone applauds as they are pronounced husband and wife.

EJ, Jonny and Dorothy are talking after the wedding. Dorothy tells them that she has been talking to Bianca’s brother. Dorothy is talking to him at the wedding. She tells him “I don’t want any trouble with your sister. I feel like she is going to be mad that I am talking to you and tell me to stay away from her family.” Brendan and Morgan share their first dance. After that Brendan invites his friend up to do the first toast. Brendan and Morgan share memories and we see them happily married.