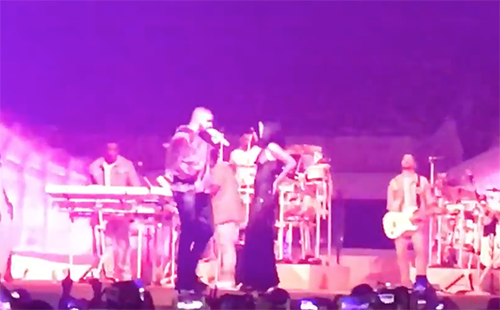 If there were any doubts that Rihanna and Drake are dating again – we can officially lay them to rest. RiRi and Drake’s on-again, off-again relationship constantly keeps us on our toes. The “Work” singers have broken up and made up more times than we can count. Since their recent collaboration on their new hit single, the internet has been ablaze with dating reports and break-up reports about Rihanna and Drake.

Rihanna and Drake never seem to comment on their relationship – apparently, they like to keep fans guessing. But, this week Rihanna kicked off her Anti-World Tour, and she brought along a surprise guest, and let the world know that there is definitely something going on between her and the Canadian born rapper.

Rihanna’s fans went in to a frenzy when she brought Drake up on stage with her. Although she didn’t flat out say, “Hey guys this is my boyfriend,” actions speak louder than words. Drake and RiRi performed “Work” for the sold-out crowd and it was definitely not a PG performance. Short of stripping off their clothes and just having sex right there on stage, Rihanna and Drake’s provocative dancing nearly broke the internet.

We get that Rihanna isn’t your typical celeb – and she’s VERY comfortable with her body. But, nobody dances, bumps, and grinds on a man like that unless they have slept with him, are sleeping with him, or are trying to sleep with him. And, in Drake’s defense, he wasn’t exactly discouraging it – he was ALL IN.

Who knows if Drake and Rihanna are together right now. They could have broken up twice since their Anti-World performance. But, one thing is for sure: there is definitely something going on there. What did you think of Drake and RiRi’s live appearance? Are you as convinced as we are that the “Work” singers are dating? Share your thoughts in the comments below!