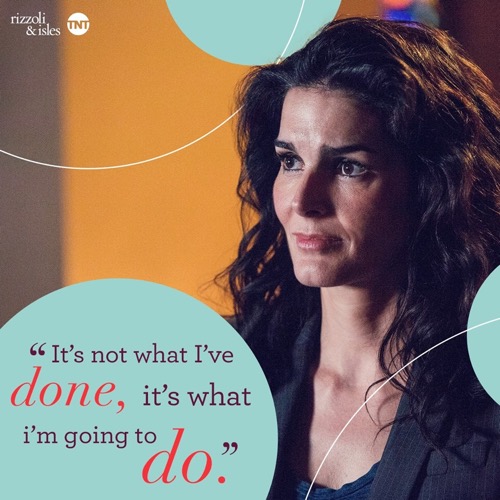 Tonight on TNT RIZZOLI & ISLES returns with an all-new Monday, June 13 season 7 episode 3 called, “Cops vs. Zombies” and we have your weekly recap below. On tonight’s episode, a murder at a zombie convention is investigated.

On the last episode, fallout from a shooting found the team searching for Alice Sands, hoping to bring her to justice before she destroyed Jane’s life. Did you watch the last episode? If you missed it, we have a full and detailed recap right here for you.

On tonight’s episode per the TNT Synopsis “a murder at a zombie convention is investigated. Also, Angela reveals she never graduated from high school, then decides to pursue her GED.”

A young kid had tried to tell his mother that he saw something strange outside his bedroom window however she refused to believe him until it was too late on tonight’s episode of “Rizzoli & Isles”.

Jared had claimed that he saw two zombies fighting and it turns out it had only been wrong about the zombie part. Apparently his comic books had gotten to him a little bit though he was right when he said he saw a fight and he had also been right when he said he saw someone injured outside. So the only reason his mother didn’t believe him was because the body had been moved. She had checked outside the window to where he claimed he saw a body on the ground and she hadn’t seen one because that hadn’t been the body’s final resting place.

The victim who had been wearing an elaborately detailed zombie costume and who was presumably fighting someone else wearing such a costume had gotten up before collapsing across the street. So the mother did eventually realize that she had been wrong to mistrust her son when the police began to crowd the area and asked if anyone saw anything. And so that’s when Jared tried to be helpful again. He told the police about the fight he had seen and he mentioned that he could identify the zombie if he saw it again.

Although when Jared said identify, the police weren’t sure if he meant that he could he detail which kind the other zombie was because he knew how to classify them thanks to his comic books or because he had gotten clear picture of the other person that night. So Jared had helped as best as he could and he had given them important informant information. The police knew that there was a fight and they figured the ticket to Zombie Con that they found on Kendall’s Judd body could lead them to the person he was fighting with. Only no one at the convention could recognize Kendall without his costume.

The convention it seems was all about not breaking character so even the security guards were dressed as zombies and real names didn’t appear to be at the convention either. So attending the convention had felt almost like a waste of time. Jane and Korsak hadn’t found anything and Frankie only got lucky with his task because he was the sole person that was looking for souvenirs at the convention rather than clues. But the body of Kendall Judd did at least yield some results.

Kendall had apparently been found with several wallets on him. So Kendall had been a pickpocket in everyday life and that gave the police a motive. Seven people at the convention had reported that their wallets were stolen so naturally any one of the seven could have been angry enough to kill. However, only one person had been caught on camera getting into a fight with Kendall on the night he died. Kendall had robbed a young woman and she claimed that she had thought he was reaching for her butt so the tale only gets to be strange when the young woman in question was shown to have her wallet on her despite there being footage of Kendall stealing it.

Christine though had said that she had seen her wallet on her Welcome mat so it doesn’t appear that she had any idea that her wallet had been stolen. Yet, Kendall had taken it and there had been dried blood on the wallet to prove that it had been in his custody when he had been attacked. So in order to verify Christine’s farfetched tale, the police brought in Jared. Jared had seen a lineup of everyone in zombie costume and he immediately told the police that their killer wasn’t there. And that meant Christine had been weirdly telling the truth.

She hadn’t known that her wallet was stolen, but whoever killed Kendall had been kind enough to go by her place and leave her wallet on her doorstep. So the police had wondered if she might be protecting someone who had killed Kendall for her only that theory didn’t pan out and neither did her abusive ex seeking revenge for her. And so that left the rest of Kendall’s victims. Seven people had been robbed and there had only been four wallets found Kendall so the police had to ask what happened to the other three.

Only it turns out that the other three had been lifted by a second pickpocket. There had apparently another criminal using the convention as a cover so the police were eventually about to track down a guy by the name of Terrence. Terrence had been working the Zombie Con scene for a while so he must have seen something if not be angry at the way Kendall was pushing in on his turf. And, well, both those things ended up being true with Terrence.

He had been angry at Kendall for nearly ruining things for him by going viral trying when he had pickpocketed Christine yet he hadn’t killed him. Terrence said that he seen Kendall leave the building and that a man with an actual limp had then followed him. Usually “zombies” at the convention had limps only the third party had a limp even as he was leaving the building so that indicated that it was real. And Christine later admitted to knowing someone with a limp.

Though “knowing” might be stretching it. Christine had said that there was this guy in her building that waters her plants and that he was really shy so she always strived to be nice to him. So Nina had tried to get into contact with the man that Christine described only he had been using a false alias to get a job at the building and things didn’t look up once Nina found who “Zachary” really was. His name was Jeremy Kendricks and he had been injured in a fire when he was a child so he had grown up angry before eventually becoming violent.

Jeremy had developed something of an obsession with Christine who he had followed to ZombieCon so it wasn’t that hard to lure Jeremy out even though he didn’t have an address for him. Jeremy it seems had tried to get into contact with Christine who he asked to meet him up on the roof. So the police chose to go up there as well and that’s when everything came out. Jeremy had had facial scarring because of that fire, but things like scars didn’t matter at ZombieCon so he had wanted to finally talk to Christine at the convention when the scene with Kendall ruin things.

So after Christine was able to talk Jeremy from going off the ledge, he was arrested and will hopefully get the treatment he needs. But Maura’s condition wasn’t so easily fixable. Maura had looked into her condition and she had found treatment yet the surgery she would have to go through ran the risk of worsening her symptoms. And therefore she didn’t know if she should take the risk or continue to make mistakes on the job.