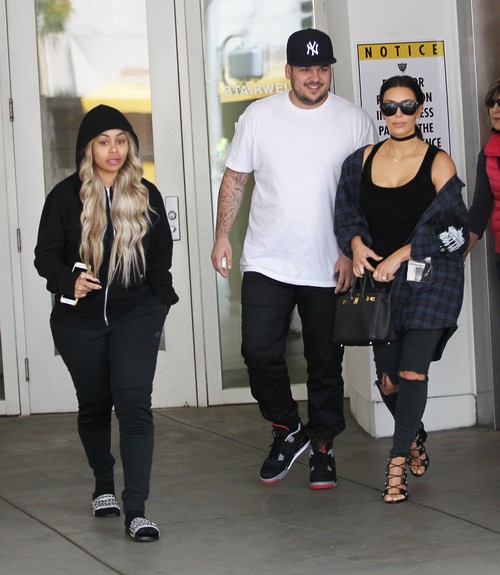 Rob Kardashian got more than he bargained for during a recent “family moment” on Keeping Up with the Kardashians. Rob’s recent engagement to Blac Chyna (worst name ever – soon to be renamed Angela Kardashian) sent ripples through the Kardashiansphere, with some family members even questioning Rob’s sanity.

The three evil sisters, Khloe, Kim and Kourtney Kardashian, held an intervention of sorts, because, you know, interventions are always great opportunities to rebuild broken relationships. Nothing says “I love you” like “stop the drugs/alcohol/Gary Busey”.

Unfortunately for them, Rob Kardashain refused to take it lying down. He bitched back at them, “Listen to the hostility in your voice. That’s exactly why I don’t say anything. This is the first time I ever proposed to someone in my life, don’t come at me with some bulls–t.”

Oh snap! Rob’s superpowers came out like John Travolta in the 80’s.

But why did the sisters react so violently towards Rob’s recent proposal to lovely Blac Chyna?

Well, Blac Chyna is like playing Words With No Friends – there’s no words and no friends, because everything is misspelt and weird and OHMYGOD did she just spell penis?

The coupling between Rob and Blac is a weird and awkward little thing. God and sad people only know why they are together.

Wait… Why are they together? I mean, do they complete each other at least? Is Blac’s Chyna merely Rob’s kryptonite? Or does she have a hold on him like a Shirley Bassey song sung by dismissed American Idols?

Kim Kardashian needs to shut up and sit down though. She is the least valuable contributor to Rob’s Blac Chyna intervention. The woman is married to Kanye West and in my eyes that takes the proverbial gold-encrusted cake. Black Chyna on her worst day is a ray of sunshine compared to what many on the Internet refer to as that scowling incomprehensible bully Kim calls a husband.

Don’t judge someone until you’ve walked a mile in their Nike shoes, especially if the size is much smaller than what you’re used to.

Love is love. And maybe Rob deserves a bit of love? Or just wild sex or something-something.

What do you think? Why are these two together? Let us know your thoughts in the comments below.

Kim Kardashian is seen leaving Nate’n Al Delicatessen in Beverly Hills, California after enjoying lunch with her brother Rob Kardashian and his fiance Blac Chyna on April 26, 2016 by FameFlynet