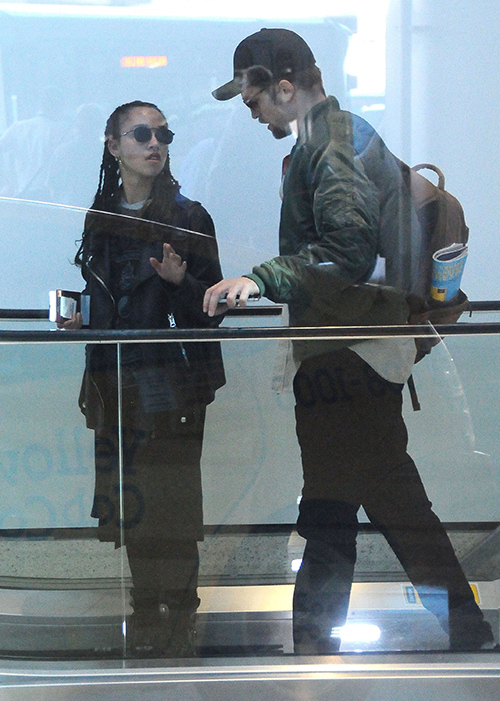 It seems as though Robert Pattinson and FKA Twigs are doing everything they can to save their relationship before either one of them pulls the plug for good. The camera-shy couple was spotted making their way through LAX airport, appearing both tense and distant with one another. Some speculate that they might be fighting more often than they’d like to admit.

According to Lainey Gossip, both Robert Pattinson and FKA Twigs have been making quite the effort to prove to both their fans and critics alike that they are still very much together, even though it’s been months since they’ve been photographed at the same place at the same time, much less happy and in love. It’s as though the couple knows that they are at the tail end of their relationship and are trying to figure out the most civil way to break up without making it a big tabloid spectacle.

The couple made a special trip to L.A. to attend Drake’s after party but are wasting no time jetting back home to London to sort out what’s next in their future. In fact, judging by how uncomfortable they look with one another, it’s doubtful that they will make it down the aisle together, much less to the holiday season.

With the two of them working totally different schedules on opposite sides of the world, they seem to be drifting further apart as their facial expressions clearly state that something is going on, and it’s not good. Is FKA worried that Robert might get a little too up close and personal with his ex Kristen Stewart on their next, but still rumored, ‘Twilight’ film together? Is Robert upset that his post-‘Twilight’ career isn’t going the way it should be? Is FKA fed up with the media constantly comparing her to his ex?

No one really knows what’s going on between Robert Pattinson and FKA Twigs except the couple themselves. Both Robert and FKA can pretend to be as private as they want, but they know that because their public profiles, they are going to have to come clean with the real truth about the state of their relationship sooner rather than later. Robert Pattinson and FKA Twigs won’t be able to hide their issues for much longer, especially if they keep on delaying their wedding plans.

Tell us CDL readers, what do you think? Are Robert and FKA headed for a break up? Are they holding on to whatever is left of their engagement with a very thin string? Let us know what you think by dropping us a line in our comments section below!