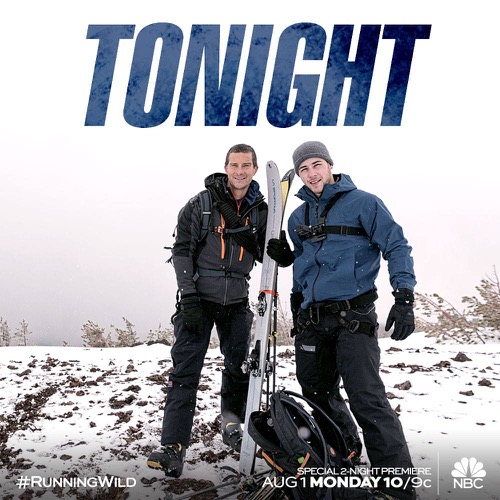 Tonight on NBC their show RUNNING WITH BEAR GRYLLS airs with an all new Monday, August 1, season 3 premiere called, “Nick Jonas,” and we’ve got your Running Wild with Bear Grylls recap down below. On tonight’s episode in the third-season opener, Nick Jonas joins Bear for a snowy mountain adventure in the Sierra Nevada during blizzard conditions.

For those of you who don’t know, the show puts celebrities’ survival skills to the test when they accompany an adventurer into remote locations around the world.

On tonight’s episode per the NBC synopsis “in the third-season opener, Nick Jonas joins Bear for a snowy mountain adventure in the Sierra Nevada during blizzard conditions. The guys rappel down a sheer cliff, eat a frozen bird and swim across a freezing lake.”

The two-day adventure starts with a helicopter ride through a massive snowstorm, landing deep in the heart of the Sierra Nevada Mountains. The two strap on their skies and, after fixing Nick’s ski skins which he attached backwards, the two set off. Nick discusses his diabetes and how that has impacted his health and lifestyle as they ski forward.

The two reach a summit and are forced to dig a trench, bury their skis and use the solidified mass as a base from which to rappel down the summit. Bear descends first, and first-timer Nick struggles to stay on his feet as he follows Bear down the steep drop-off. Half-way down, the two pair up for a series of balance and counter-balance moves around large boulders. At the bottom of the descent, Nick discusses fame at a young age, his normal home life and his Christian beliefs.

After resting, the two begin to worry about avalanche risks and continue their journey, with Bear in the lead. With daylight fading, the duo pick up the pace and turn their focus to food and shelter for the night. Bear discovers a frozen bird and has Nick stick the bird down his pants to defrost. The pair dig for grubs to supplement their dinner and Nick bravely pops one into his mouth. When Bear’s back is turned, Nick removes the dead bird from his pants and transfers it to his pocket. Bear and Nick construct a shelter using tree limbs and mounds of snow.

Bear cuts some of the down out of his and Nick’s clothing to use as tinder for a fire and has Nick help him remove the bird’s head. The two gut the bird and stuff the grubs inside before skewering it and placing their entrée on the fire. While the bird cooks, the two discuss Nick leaving the Jonas Brothers, his solo career and past relationships. The mountaineers eat the bird and hunker down in their makeshift shelter for the night, snuggling together for body warmth.

The next morning, the two prepare for a steep descent. Bear slides down the descent without incident and Nick manages the slide like a pro. Before being able to reach their extraction point, Bear tells Nick they have to wade across an ice-cold lake. The duo strip off their clothes and slide into the icy water. They make it across the water and quickly put their clothes back on. Because of his diabetes, Nick’s feet become painful from lack of circulation; Bear puts Nick’s feet in his armpits for warmth until the pain subsides. The two reach their snowmobile and ride out of the mountains.