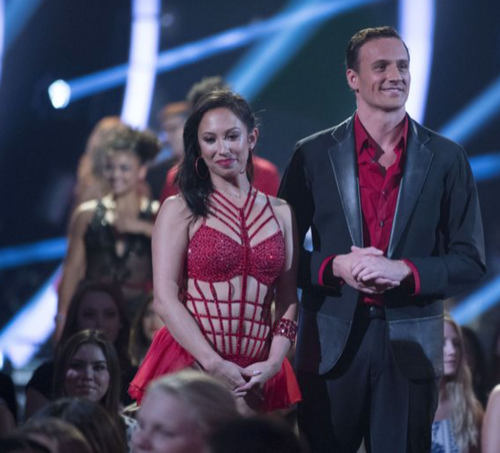 Tonight on ABC the glitz and the glamour returns to the ballroom as Dancing With The Stars returns for the second episode of the 23rd season.  American competitive swimmer and a 12-time Olympic medalist Ryan Lochte & his professional dancer Cheryl Burke took the stage tonight and danced the Quickstep to  “The Muppet Show Theme” for their TV theme song. Did you watch tonight’s DWTS episode? If you missed it we have a full and detailed recap, right here for you. Did you miss any of tonight’s performance videos? If you did we have them all, right here for you!

Ryan is very excited about dancing and tweeted a message to her twitter fans to let them know how she is doing, “#DWTS #quickstep #rehearsal #exhausted”

Judges comments on Ryan Lochte’s DWTS Season 23 Week 2 Quickstep: Julianne: “The concept was amazing but I do have to say I saw so many mistakes. Once thing I would say if you are here next week work on the frame.”  Bruno: “It was great you embraced the character but you have the posture of fozzy bear.  You have to maintain the frame.  Keep the positive energy!”  Carrie Ann: “For all you went through I appreciate the joy your brought.  There was a lot of problems but it was fun.”

Watch the video below and let us know what you think, do you agree with the judge’s comments? Do you think Ryan did enough to avoid elimination tomorrow? Make sure to head over and check out all our DWTS recaps, spoilers, news & more, right here.

Ryan dances to the Muppets

Ending for his dance — mom in crowd