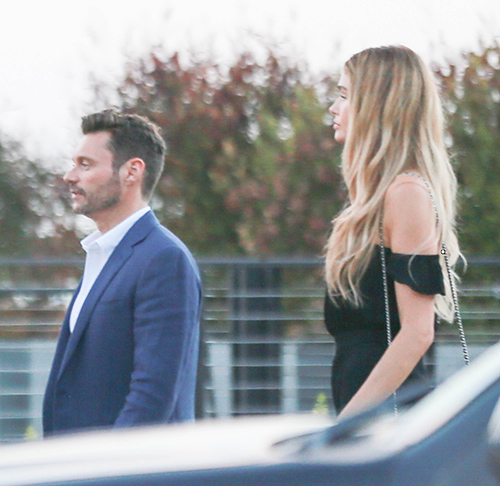 Does Ryan Seacrest, the 41-year-old media mogul, have a new girlfriend? It appears that way, as the radio host was spotted with a blonde woman heading to Nobu for dinner. Ryan isn’t the tallest man in the world, so this hot lady friend of his rose a head above him.

Ryan Seacrest isn’t in the tabloids regularly, perhaps the way he likes it, but when he does make the news it’s often because he’s found himself some new arm candy. Seacrest definitely gravitates to blondes, so it doesn’t seem outside the realms of possibility to assume that these two are a couple – or, at the very least, hooking up on the down low.

Other ladies that Seacrest has been linked to in the past include Shana Wall (Amazing Race contestant), Paulina Rubio, Holly Huddleston, Sophie Monk, Sara Jean Underwood, Dominique Piek, Shayna Taylor, and Teri Hatcher. You also might remember one of his most publicized relationships with dancing pro/actress Julianne Hough.

What do you think about Ryan and his possible new girlfriend? Check out the pics below and let us know what you think in the comments section below. Keep checking CDL for all your celebrity news and updates!

“TV host and personality Ryan Seacrest was spotted with a tall blonde heading to Nobu for dinner in Los Angeles, California on July 2, 2016. His new friends towered over him as the two walked into the restaurant.”