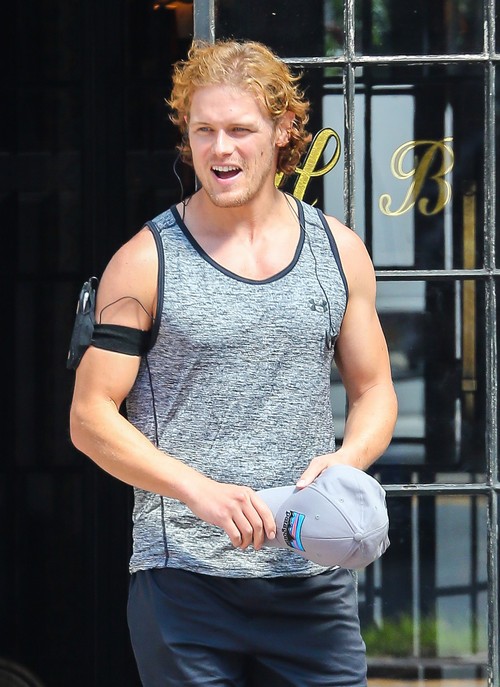 The drama surrounding Taylor Swift and Tom Hiddleston’s relationship is definitely doing the actor no favors. First, he found himself involved in Taylor Swift and Calvin Harris’ breakup and then the actress’ feud with Kanye West over her name being used in the lyrics for his son, ‘Famous.’

To make matters worse, Kim Kardashian’s leaked tapes proved that Taylor Swift isn’t the victim she likes to portray herself to be, leaving Tom Hiddleston wondering if didn’t make a huge mistake when he decided to date the ‘Bad Blood’ singer. If it weren’t bad enough that Taylor Swift might have cost Tom Hiddleston’s James Bond role, but now he might have lost some very lucrative modeling contracts, too.

Even though Tom’s being tipped to take over Calvin Harris’ Armani ad campaign, ‘Outlander’ star Sam Heughan might beat him to it. The sexy Scottish actor is bing called the ‘next Tom Hiddleston’ thanks to his smoldering new ad campaign with British brand Barbour.

According to the Daily Mail, a spokesman for Barbour revealed, “When I first met Sam, I was immediately struck by the similarities with Barbour. The British countryside has been at the heart of the brand since 1894. Sam’s Scottish roots and his genuine love of the outdoors means he brings an authentic and very real connection to the partnership.”

Clearly, the Scottish actor is a much better pick than Tom Hiddleston, who has found himself in murky territory thanks to his very public love affair with Taylor Swift. Sam Heughan and Caitriona Balfe’s secret romance is no where near as controversial or drama-fueled the same way Tom Hiddleston and Taylor Swift are.

To add even more salt to his wounds, fans are even saying that Sam Heughan would make a much more masculine James Bond than Tom Hiddleston would, which is definitely a comment that is bound to sting.

With the way things are going, fans will definitely see more of Sam Heughan than Tom Hiddleston in the coming weeks. One successful ad campaign will definitely lead to another, and before he knows it, Sam Heughan’s career will go from ‘Outlander’ to the big screen in no time.

Tell us CDL readers, what do you think? Is Sam Heughan the media’s ‘next Tom Hiddleston?’