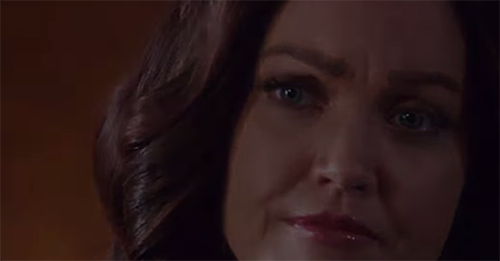 Scandal spoilers for Season 5 Finale Episode 21 “That’s My Girl” tease that running mates must be chosen by Frankie Vargas (Ricardo Chavira) and Mellie Grant (Bellamy Young). Rowan Pope (Joe Morton) wants in the presidential game – how can he get back into it?

Mellie debates her choice of running mate amid all the other drama she and Olivia Pope (Kerry Washington) are facing. Mellie portrayer Bellamy Young told InStyle magazine, “The season finale is nothing any of us could have anticipated or expected.”

Young added, “It sets up Season 6 so brilliantly – and it is really a jaw-dropper. I think we’re bringing it home just beautifully… [It] really got us in table reads. We all cried like three times. It’s a doozy of an episode and a real gem.”

Rowan pays a visit to Cyrus Beene (Jeff Perry) at the Vargas campaign headquarters to lay some blackmail on the king-maker. Whatever Rowan knows stuns Cyrus. Does Rowan threaten to tell Frankie that Cyrus masterminded the shooting and set up Frankie’s brother Alex Vargas (Danny Pino)?

Or does Frankie himself have some skeletons in his closet that Rowan discovered? Frankie seems like a decent guy so perhaps Rowan faked something… We’ll see what it is soon enough. Does Rowan want Cyrus to force Frankie to put Jake on his ticket?

By the end of the episode, Cyrus is in dire shape. Jake Ballard (Scott Foley) finds Cyrus unconscious at his home and tries to revive him. It’s doubtful Jake hurt him since Jake is himself hoping that Olivia will rescue him, so that’s his focus right now – not doing Rowan’s dirty work.

Mellie and Fitz Grant (Tony Goldwyn) bicker – is this over Olivia? Some Scandal spoilers tease that Fitz may find out that Olivia aborted his child – and this could destroy the lame duck president. Fitz is angry at Abby Whelan (Darby Stanchfield) – could it be over the abortion info?

Olivia has no regrets, but Fitz will be stunned that she would do that to him and their child. Meanwhile, Olivia also has to deal with her other lover, Jake, who wants to get out from under her dad. Of course, Olivia can’t help him or else Rowan will have Jake killed.

Will Olivia find a way to keep Mellie’s campaign together, deal with Fitz’s anger, and save Jake from her father – or will Rowan triumph once again? Scandal Season 6 teasers indicate that there may be a time jump so the new season may pick up AFTER the election ends.

What do you think, Gladiators? Can Olivia beat her dastardly dad and protect those she loves? Are she and Fitz irretrievably broken? And does anyone else sense the killer chemistry between Abby and Fitz that seems to be brewing? Will “Fibby” be a new couple in Season 6?

Share your thoughts on the Scandal Season 5 Finale airing Thursday, May 12. And be sure to tune into CDL for a LIVE recap of Scandal Finale Season 5 Episode 21 ‘That’s My Girl.’