Sister Wives Divorce: Kody Brown Kicked Out By All 4 Wives Due To Major Financial Problems? 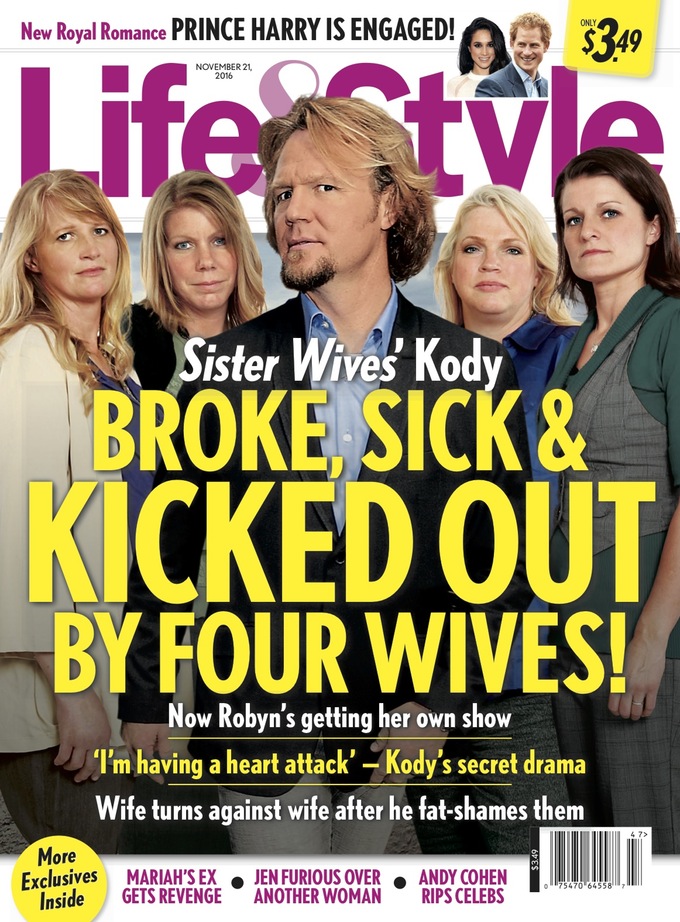 There’s a new report swirling around that Kody Brown is headed for a divorce with all four of his Sister Wives. In fact, there’s speculation that the reality television star simply can’t handle supporting his very large family as he’s been dealt some major money issues in the last several months.

According to Life & Style Weekly, documents suggest that the Brown family is having a hard time paying off medical bills after Robyn’s son Dayton had extensive surgery to repair his face following an ATV accident.

And now sources say that Kody along with Meri, Janelle, Christine, and Robyn are being forced to make some very difficult decisions about their fate, especially since they’ve been so used to living a comfortable, if not slightly lavish lifestyle thanks to their TLC paychecks.

In fact, Kody is so stressed over his problems that some are worried that his health is declining as he’s even told his family members that he sometimes feels like he’s having a heart attack because of his secret drama.

Of course, plenty of critics are going to compare Brown’s financial situation to that of Michelle and Jim Bob Duggar’s, who have lost millions of dollars in income after the TLC network pulled the plug on their reality show, ’19 Kids & Counting.’

Many of their sponsors, promoters and advertisers soon dropped them, leaving the Duggars very few options and over 19 mouths to feed. Things have gotten so bad that there have even been rumors swirling that Michelle Duggar is ready to leave Jim Bob and file divorce papers of her own.

So are the Sister Wives trying to follow suit by leaving Kody Brown as well? Are Meri, Janelle, Christine and Robyn coming together and plotting to leave their husband simply because their worried that he might not be able to financially provide for them anymore?

That might be the case but then again, no one knows what the real truth is except for of course Kody and his wives. To make matters worse though, ratings for their show have been very low, prompting producers to reconsider their reality television future.

The show is expected to return in late November, but if Kody and his wives don’t put the effort in to help promote the show as much as possible, there’s a very high possibility that they might end up in reality television obscurity sooner rather than later. If TLC does pull them off the air, it might very well be over for Kody Brown and the Sister Wives. Do you agree?

Check back with CDL for all the latest news on the Sister Wives.

.@JanelleBrown117 talks about a barrier we all know too well, lack of self esteem: https://t.co/sA8dZqaL3M pic.twitter.com/uDTgdfIMze